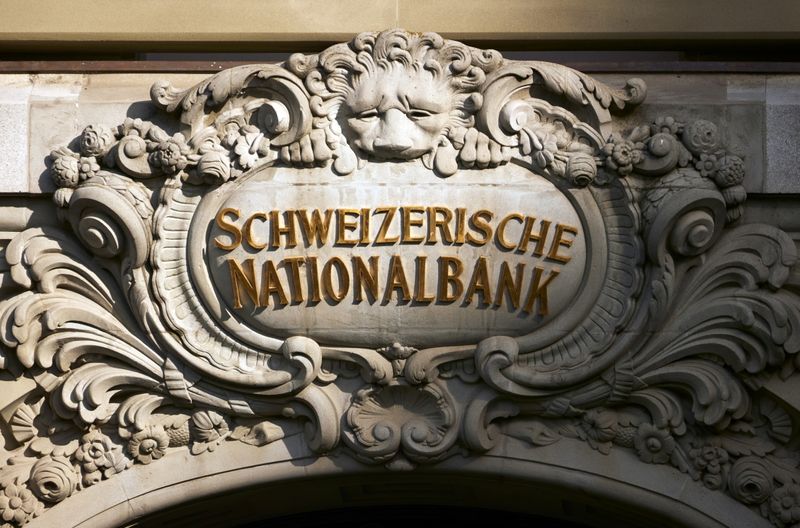 ZURICH (Reuters) -The Swiss National Bank is no longer standing in the way of the franc’s appreciation, according to data published on Monday, in an eye-catching change in view of the safe-haven currency’s rise to its highest against the euro in more than six years.

The central bank’s apparent stance will confound investors who have grown used to the SNB’s mantra that it would fight tooth and nail with negative interest rates and foreign currency purchases to restrain the .

On Monday, the franc rose to 1.0426 against the euro – its highest level since July 2015 – fueled by the emergence of a new COVID-19 variant, low Swiss inflation and the weakness of the euro.

The level is not far off the 1:1 against the euro the franc briefly reached after the SNB’s last policy shift in Jan. 2015.

But the latest sight deposit data – a proxy for the SNB’s interventions – increased by only 94 million francs last week, a fraction of the forex purchases seen last year.

One factor for the small increase could be the withdrawal by bank customers of cash, economists say, which happens every year in the lead up to Christmas and reduces the amount of cash the banks hold on sight with the SNB.

“Still, an increase of less than 100 million francs shows the SNB chose not to defend the 1.05 level,” said J.Safra Sarasin economist Karsten Junius.

The development could mean the SNB has given up restraining the franc at its current level, because of benign Swiss inflation and the country’s robust economy.

Instead, the central bank may be storing up its firepower to prevent rapid and large-scale appreciation instead, economists say.

The SNB declined to comment about Monday’s data and the economists’ reaction to it.

“If the franc stays at this level of around 1.05, a little bit above, a little bit below, the SNB won’t do a lot,” said Thomas Stucki, the chief investment officer at St Galler Kantonalbank and the former manager of the SNB’s foreign currency reserves.

“They will prevent the movement below 1.04 to 1.03” he added. “Then they will step up interventions.”

The franc was on course to eventually reach parity, Stucki added.

“It’s clear from the development of inflation in Europe and Switzerland the franc will become more expensive over time,” he said. “We don’t expect parity to be reached next year, but we think it will happen in the next two to three years.”

Over the weekend, governing board member Andrea Maechler said the SNB was monitoring the franc’s level, although the central bank didn’t target a specific rate, she said.

Swiss inflation at 1.2% is well within the SNB’s definition of price stability and reduces the need to act.

Due to the much stronger inflation in the Eurozone than in Switzerland, the fair value of the franc has climbed to 1.11 to the euro from 1.20 last year, he said.

“From this perspective at 1.05 the franc is not strongly over-valued anymore,” said Bee. “This warrants a lower intervention threshold for the SNB, even at this point it is unclear where this new threshold exactly is.”

The stance of the SNB will be tested in the coming days, particularly if the omicron variant of coronavirus increases demand for the franc.

“Now the situation is getting more complicated for the SNB,” said ING economist Charlotte de Montpellier. “There is a risk of a renewed flight to safety and a strengthening of the currencies considered as safe havens, and therefore of the Swiss franc.”

Until now, the SNB has done the right thing not wasting too much money defending the franc, said J Safra Sarasin economist Junius.

“I do think they will try to halt any appreciation at 1.03. That would be last line of defence before parity,” he said.