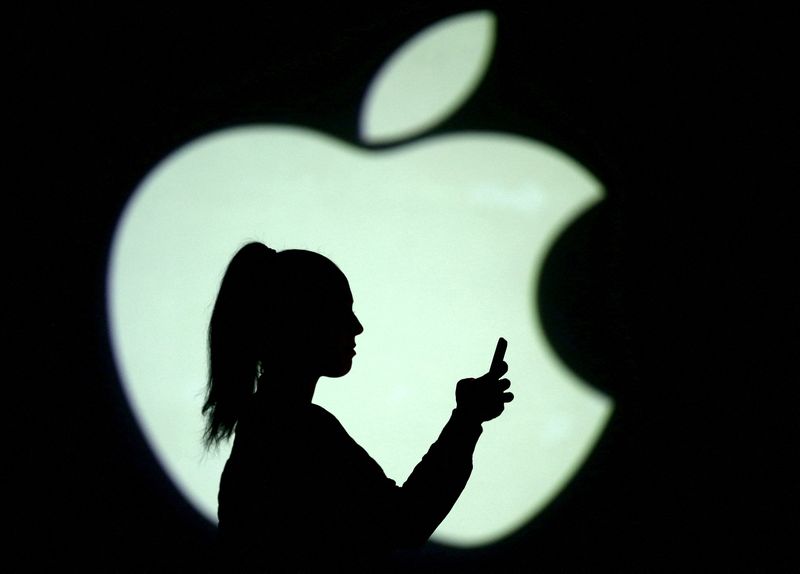 © Reuters. FILE PHOTO: Silhouette of a mobile user seen next to a screen projection of the Apple logo in this picture illustration taken March 28, 2018. REUTERS/Dado Ruvic/Illustration/File Photo

Apple’s practice of requiring app developers to use its in-app payment system and pay commissions of 15% to 30% on digital goods purchases has come under scrutiny from regulators and lawmakers around the world.

The Dutch investigation into whether Apple’s practices amounted to an abuse of a dominant market position was launched in 2019 but later reduced in scope to focus primarily on dating market apps, including Tinder owner Match Group Inc (NASDAQ:).

“We disagree with the order issued by the ACM and have filed an appeal,” Apple said in a statement, adding that “Apple does not have a dominant position in the market for software distribution in the Netherlands, has invested tremendous resources helping developers of dating apps reach customers and thrive on the App Store.”

Reuters reported in October that the Netherlands’ Authority for Consumers and Markets (ACM) had found Apple’s practices anti-competitive and ordered changes, but the decision was not published.

The regulator’s decision, published on Friday, said Apple violated competition laws and it has ordered Apple to adjust the unreasonable conditions in its App Store that apply to dating-app providers.

The decision orders Apple to allow dating-apps providers to use alternative payment systems. The company faces a fine of up to 50 million euros ($56.6 million) if it fails to comply.

Apple was given until Jan. 15 to implement changes, a statement said.

The disclosure of Apple’s regulatory setback in the Netherlands comes after the iPhone maker lost a fight in South Korea to stop a law that requires major app platform providers like Apple and Alphabet (NASDAQ:) Inc’s Google to allow developers to use third-party payment services.

Google has indicated it will allow such payments, though it will still charge a commission on them. Apple has not commented on its plans for compliance in Korea.

Apple is facing proposed legislation in the European Union and United States that would force it to change its in-app payment policies and other business practices developers have objected to.