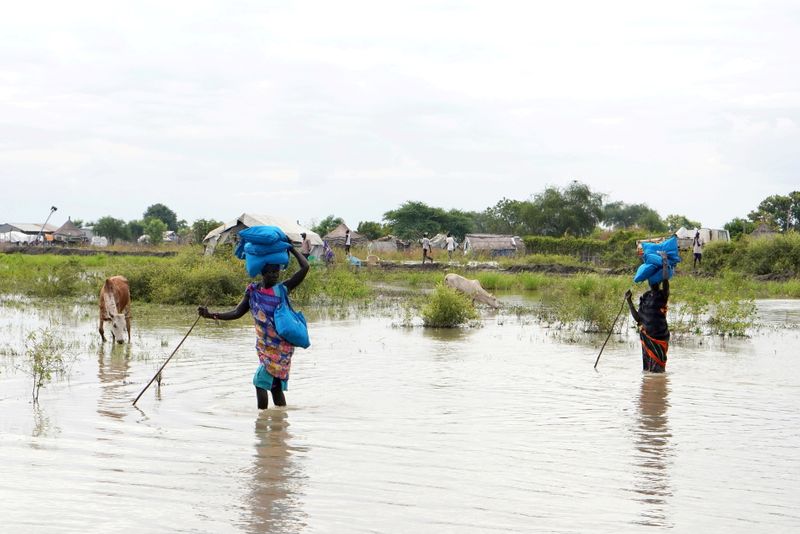 © Reuters. FILE PHOTO: Women carry sacks on their heads as they walk through water, after heavy rains and floods forced hundreds of thousands of people to leave their homes, in the town of Pibor, Boma state, South Sudan, November 6, 2019. REUTERS/Andreea Campeanu

By Andrea Januta and Simon Jessop

GLASGOW, Scotland (Reuters) – Poor nations are pressuring their wealthy counterparts at the U.N. climate summit to pay up for the mounting damage being caused by global warming, pointing to increasing powerful storms, cyclones, droughts and floods afflicting their people.

The campaign being waged at the U.N. climate summit in Glasgow, Scotland seeks hundreds of billions of dollars per year more for climate-vulnerable economies even as they struggle to access some $100 billion pledged by world powers years ago.

Those previously promised funds, meant to help developing nations transition off fossil fuels and adapt to the future realities of a warmer world, were offered in recognition that poorer countries are least responsible for climate change.

“We’ve been too slow on mitigation and adaption, and so now we have this big and growing problem of loss and damage,” said Harjeet Singh, an advisor with Climate Action Network, who is involved in the negotiations on behalf of developing countries.

He said negotiations so far were focused on including language about “loss and damage” in the official text of the summit agreement, a request that he said was facing resistance from the United States, the European Union and other developed countries worried by the potential costs and legal implications.

Asked whether the European Union should consider a loss and damage fund separate from funding for mitigation and adaptation, Juergen Zattler, head of the German Ministry for Economic Cooperation and Development, said he believed the question was premature.

“I don’t think the discussion is at that stage yet,” he told reporters at the Glasgow summit. “We do not know yet what loss and damage actually is, how it is different from adaptation. We are poking in the dark here.”

EU climate policy chief Frans Timmermans told reporters the bloc supported efforts to “get money where it needs to be as quickly as possible” but that work still needed to be done to get the details right.

A representative of the U.S. delegation at the conference did not respond to a request for comment.

Climate-vulnerable countries have been raising the issue of who should pay for climate damage since the earliest international talks on global warming decades ago, before the impacts of global warming were seen as a current threat.

Economists now estimate the costs of damage from climate change-related weather events could be around $400 billion per year by 2030. A study commissioned by development agency Christian Aid, meanwhile, estimated that climate damage could cost vulnerable countries a fifth of their gross domestic product by 2050.

“It has been a fight every time to get loss and damage to become a standing item at COP. We need to continue to hold the big emitting countries accountable,” said Kathy Jetnil-Kijiner, a representative of the Climate Vulnerable Forum representing nations disproportionately affected by global warming.

Singh, from the Climate Action Network said wealthy nations could acquire the funds, at least in part, by revoking subsidies and imposing fees on fossil fuel companies.

He added that without some financial assistance, the costs of damage from climate change could bankrupt fragile economies, hampering their ability to contribute to the fight against climate change. If financially ruined, for example, countries will further struggle to fund measures like switching off dirty coal.

“If your house is on fire, you first put out the fire. Not think about how to prevent fires 10 years from now,” he said.