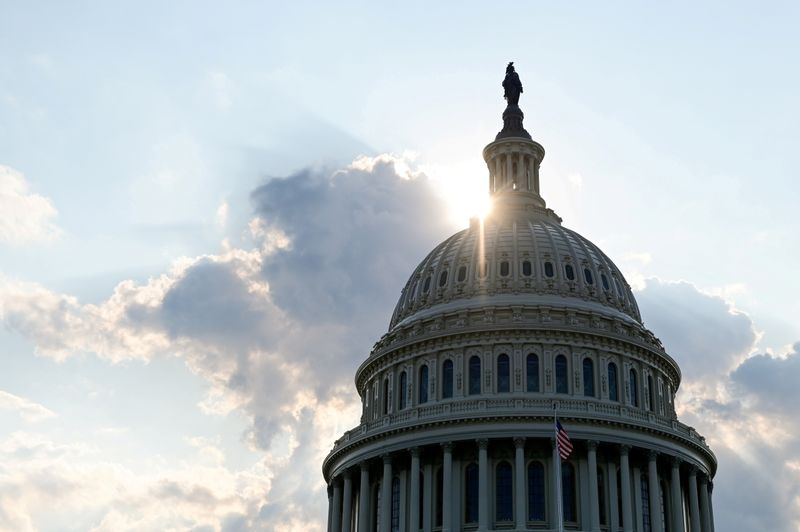 © Reuters. FILE PHOTO: The dome of the U.S. Capitol Building is seen as the sun sets on Capitol Hill in Washington, U.S., July 26, 2019. REUTERS/Erin Scott/File Photo

By Richard Cowan and Susan Cornwell

WASHINGTON (Reuters) -The U.S. Senate aims to vote next week on raising Washington’s borrowing authority and keeping the government funded, the chamber’s No. 2 Democrat said on Wednesday, as a House Democrat warned that Republican opposition could lead to a historic default on the nation’s debt.

Senator Dick Durbin said the chamber sometime next week would take up the bill passed in a party-line House of Representatives vote. Senate Republican leader Mitch McConnell has said his caucus will sink the emergency legislation to suspend the $28.4 trillion federal debt ceiling.

Time is short as funding for federal agencies expires on Oct. 1 and the U.S. Treasury has warned it could run out of money to pay the government’s bills by some time in October, potentially triggering a default.

House Budget Committee Chairman John Yarmuth said “parliamentary obstacles” prevent Democrats from including language to raise the debt ceiling in a social spending bill moving through Congress under the budget reconciliation maneuver that circumvents the need for Republican votes.

“The ball is now in Senator McConnell’s court. If he doesn’t support this (House-passed) bill – or at least ensure it is not filibustered – our country will default and our government will shut down,” Yarmuth said in a statement. “The decision is now his.”

It further complicates a messy picture for Congress, where talks aimed at police reform collapsed https://www.reuters.com/world/us/republicans-are-refusing-back-police-reforms-trump-supported-white-house-2021-09-22 on Wednesday and the moderate and progressive wings of President Joe Biden’s Democratic Party are deeply divided https://www.reuters.com/world/us/splits-among-democrats-plague-effort-pass-bidens-domestic-agenda-2021-09-21 on the size of a proposed $3.5 trillion social spending bill that is at the core of the White House’s domestic legislative agenda.

Republicans are betting that dragging out the debt debate will further stymie https://www.reuters.com/world/us/republicans-see-opportunity-us-debt-ceiling-standoff-2021-09-22 Democrats.

Republicans say they support additional spending to keep the government operating with the Oct. 1 start of the fiscal year and to help communities recover from recent natural disasters.

But they refuse to vote for it, saying raising the nation’s borrowing authority is Democrats’ problem because of the $3.5 trillion spending plan to invest in expanded social services and address climate change.

Democrats note that they voted to raise the nation’s debt limit during Republican Donald Trump’s administration even though they opposed deep tax cuts that added to the debt.

Durbin said: “There comes a point where you have to accept responsibility” for avoiding a U.S. government default on its debt in coming weeks and provide temporary federal funding for the fiscal year that begins on Oct. 1 to avoid the third partial U.S. government shutdown in a decade.

Federal Reserve Chair Jerome Powell said on Wednesday it is “very important” for Congress to raise the federal debt ceiling in a timely fashion and that no one should assume the central bank can fully protect the economy or financial markets in the event of a U.S. debt default.

Biden met on Wednesday with a number of Democratic lawmakers in an attempt to heal divisions over his $3.5 trillion budget reconciliation plan of climate and social spending measures that Democrats aim to pass in coming weeks using special procedures that do not require Republican support.

Moderate Democrats see the price tag as too high, while some House progressives are threatening to vote down a bipartisan $1 trillion infrastructure bill backed by the president, and set for a Monday vote, unless the $3.5 trillion bill is also nailed down.

There was a “robust” discussion of the top line for the budget reconciliation plan, Senator Mark Warner, one of the moderate lawmakers, told reporters after the meeting.

“He (Biden) just basically said: ‘Find a number you’re comfortable with, based on the needs that we still have, and how we deliver to the American people,'” said Senator Joe Manchin, another moderate. Manchin has urged the price tag be no more than $1.5 trillion.

A third Democratic moderate, Senator Jon Tester, said: “I think he (Biden) wants to get something by the first part of next week” in terms of agreement on the reconciliation plan.

But there were fresh signs of Democratic infighting as 11 liberal senators supported the House progressives who want the planned Monday vote on infrastructure delayed.

Senator Bernie Sanders and the other 10 senators said in a statement they had voted for the bipartisan infrastructure bill with the understanding that the two bills would move together.

“Passing the infrastructure bill first would be in violation of that agreement,” they said. “That is what we agreed to, it’s what the American people want, and it’s the only path forward for this Congress.”