The Australian Dollar may attempt a recovery versus the US Dollar this week. Economic data out of China is on traders’ radars, with industrial profits for August set to cross the wires at 01:30 GMT. Factory profits have risen for the past five months, helped by recovering domestic consumption and pricing advantages. July’s data point came in at 57.3% on a y/y basis. AUD/USD may see some upside pressure if August shows another increase. China is Australia’s largest partner by trading volume, making the Aussie Dollar sensitive to China’s economy.

The US Dollar may continue rising this week after the shift higher in yields. Particularly, rates along the front-end of the yield curve rose faster than the backend, which bodes well for Greenback strength. Short-term Treasury rates are more sensitive to interest rate adjustments. The chance for a 25 basis point Fed rate hike at the June 2022 FOMC meeting shifted up to 15.6% from 9.9% the week prior. That said, it wouldn’t be a surprise to see continued strength in the USD DXY index.

Monday’s session will bring data out of Japan, with the July final coincident and leading economic index prints, but the APAC session’s docket is rather sparse elsewhere. The European session will see European Central Bank (ECB) Chief Christina Lagarde speak, followed later in the day by Bank of England (BoE) Governor Andrew Bailey. Like with the Federal Reserve, rate hike bets for the Bank of England increased last week following its own rate decision.

AUD/USD is holding above two descending trendlines, one from July and the other from earlier this month. Holding above those may set the stage for a rally this week, although slipping below those levels may see losses quickly accelerate. The falling 26-day Exponential Moving Average (EMA) serves as resistance after capping upward price action last week. RSI and MACD are both neutrally positioned. 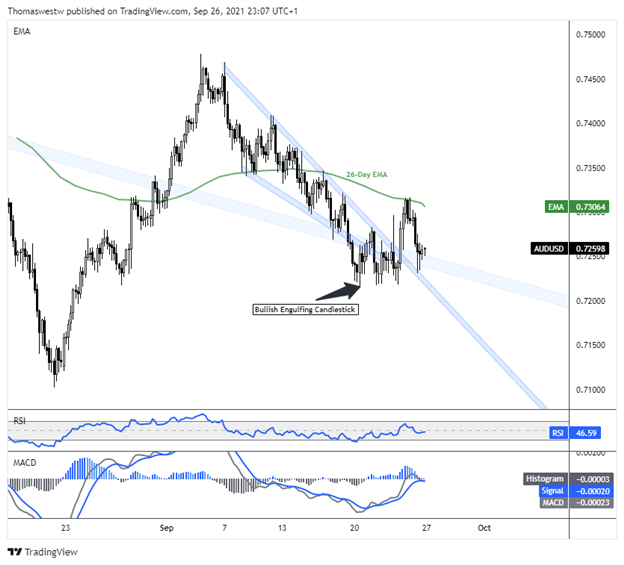