The risk-sensitive Australian Dollar fell versus the USD overnight as US stocks collapsed on Wall Street. Technology and small-cap stocks led the losses, with the Nasdaq 100 Index sinking over 2% at the closing bell. A potential credit crisis in China is dragging sentiment over hot coals, as investors weigh contagion risks stemming from the real estate giant Evergrande Group and its recent warnings over defaulting on payments.

Evergrande’s share price fell over 10% in Hong Kong on Monday, bringing the total year-to-date loss to over 86%. Some are comparing the price drop to that seen in Bear Sterns in the early days of the 2007/2008 financial crisis. In another comparison to the 2007/2008 financial crisis, there is speculation that Beijing may step in to bail out the company, much like the US did with big banks during the US housing crisis.

AUD/JPY, a currency pair often viewed as a sentiment gauge, fell over half a percent overnight. US Treasuries and government bonds in New Zealand and Australia attracted haven flows. The US 10-year note’s yield fell by the most since August 13. Yields move inversely to bond prices. Mainland Chinese markets remain closed today for the Mid-August Festival.

The Australian Dollar may see a reaction from the Reserve Bank of Australia (RBA) meeting minutes due out today at 01:30 GMT. In its September meeting, the RBA decided to stick with a plan to reduce asset purchases from AU$5 billion to AU$4 billion. However, the central bank pushed back the timeline on those bond purchases to February 2021.

AUD/USD is making a modest recovery in the early Asia-Pacific trading hours after losing ground overnight. Prices are back at Falling Wedge support after breaking below the level Monday. The move is typical, with prices often retesting the support/resistance levels on post-wedge breakouts and breakdowns.

That said, if AUD/USD fails to retake the support level, prices may reverse lower and selloff. The 61.8% Fibonacci retracement from the August/September move appears to be offering a layer of support. Meanwhile, the 20-day Simple Moving Average (SMA) looks to be nearing a cross above the longer-term 50-day SMA, which is a bullish sign. Still, the currency pair sank below a longer-term trendline from July, which may prove to be a solid point of resistance. 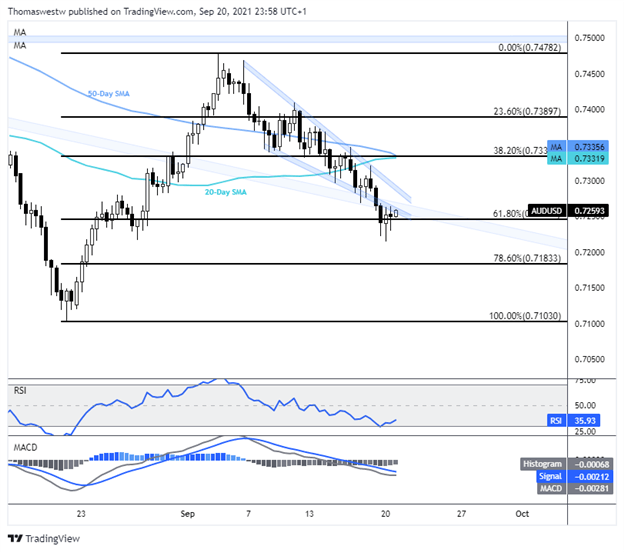