Major headwinds to the economic recovery, such as Covid-19 cases and rising prices, have traders reevaluating risk exposure. Rising yields also point to a solid belief that higher rates are now locked in. The safe-haven US Dollar and Japanese Yen gained amid the market turmoil. Crude oil fell against the stronger Dollar and a surprise build in inventory levels. The American Petroleum Institute (API) reported a build of 4.12 million barrels, which surprised analysts’ expectations for a reduction in stocks.

The economic calendar is void of potential risk events, but Japan’s lawmakers will vote to replace its party leader in the ruling Liberal Democratic Party elections. Taro Kono and Fumio Kishida are the top contenders. The Japanese Yen may see a volatile section as election news makes its way across the wires today.

China reported downbeat industrial profits yesterday, with the year-over-year figure for August slowing to 49.5%, down from 57.3% in July. Later this week, China’s National Bureau of Statistics (NBS) will report manufacturing and services sector PMIs for September. Chinese economic data is under the gun, even more so than usual, with the Evergrande Group’s potential downfall amplifying regional risks factors. The Australian Dollar may react on the data given the country’s trade relationship with China.

The Australian Dollar fell overnight although the pace of losses slowed. A price floor near the 0.72 handle appears to be in place, along with support from a prior trendline from July. A break below those levels may see bearish pressure strengthen. The falling 26-day Exponential Moving Average (EMA) is likely to offer resistance if prices rebound in the near term. 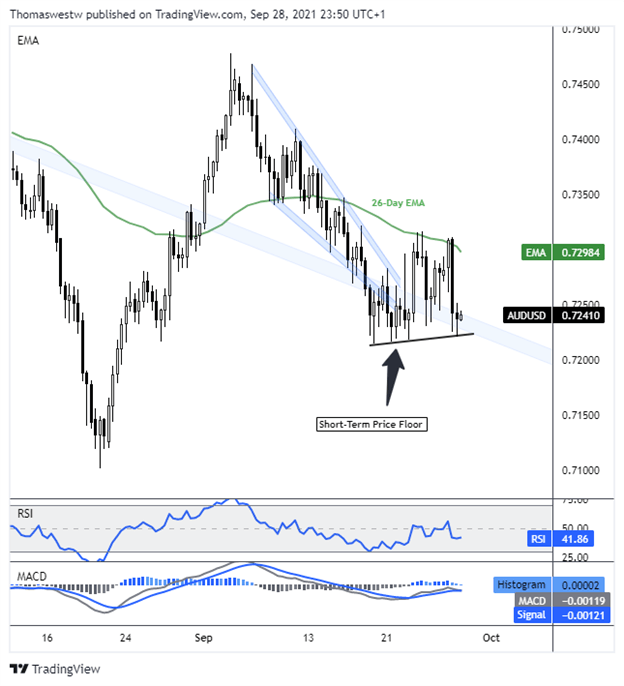