AUD/USD extends the advance from earlier this week after showing a limited reaction to the larger-than-expected rise in US Retail Sales, but the update to Australia’s Employment report may undermine the recent rebound in the exchange rate as job growth is expected to hold flat in January.

AUD/USD trades to a fresh weekly high (0.7198) evenas retail spending in the US increases 3.8% in January versus forecasts for a 2.0% rise, and exchange rate may continue to retrace the decline from the monthly high (0.7249) as it extends the series of higher highs and lows from the start of the week.

However, fresh data prints coming out of the Australia may undermine the recent advance in AUD/USD as the region is anticipated to add zero jobs in January, and a dismal development may encourage the Reserve Bank of Australia (RBA) to adopt a wait-and-see approach for monetary policy as the “central forecast is for the unemployment rate to fall to below 4 per cent later in the year and to be around 3¾ per cent at the end of 2023.”

As a result, the RBA may wait for a further improvement in the labor market before switching gears as “the Board is committed to maintaining highly supportive monetary conditions to achieve its objectives of a return to full employment in Australia and inflation consistent with the target,” and AUD/USD may face headwinds throughout 2022 with the Federal Open Market Committee (FOMC) on track to implement higher interest rates ahead of its Australian counterpart.

Nevertheless, recent price action raises the scope for a larger recovery in AUD/USD as it extends the series of higher highs and lows from the start of the week, and a further advance in the exchange rate may continue to alleviate the tilt in retail sentiment like the behavior seen during the previous year. 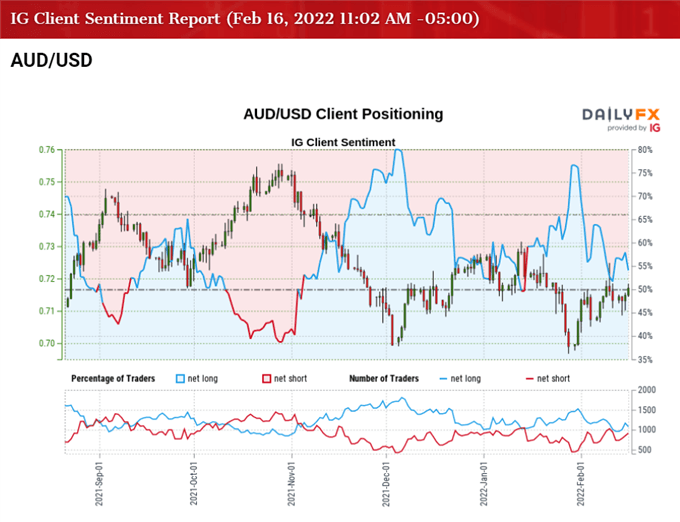 The IG Client Sentiment report shows 51.55% of traders are currently net-long AUD/USD, with the ratio of traders long to short standing at 1.06 to 1.

The number of traders net-long is 2.05% lower than yesterday and 7.27% lower from last week, while the number of traders net-short is 23.03% higher than yesterday and 4.56% higher from last week. The decline in net-long position comes as AUD/USD extends the bullish price series from earlier this week, while the rise in net-short interest has helped to alleviate the crowding behavior as 55.93% of traders were net-long the pair last week.

With that said, the update to Australia’s Employment report may curb the recent advance in AUD/USD as job growth is expected to hold flat, and the advance from the January low (0.6968) may turn out to be a correction in the broader trend as market participants prepare for higher US interest rates. 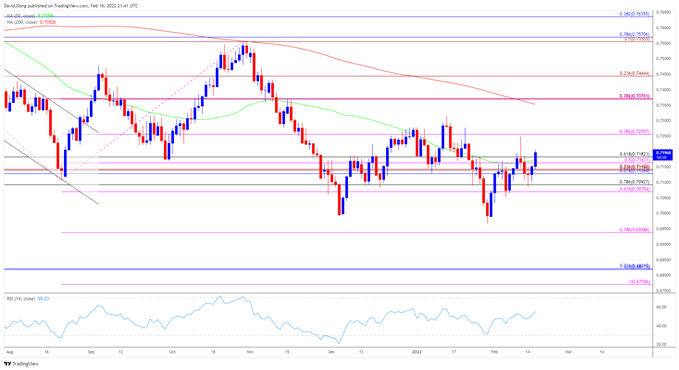