Asia Pacific markets may see risk assets move lower today as the US Dollar gains steam into the morning trading hours. The DXY USD index caught a bid following an initial volatile reaction to Wednesday’s FOMC announcement. The Federal Reserve failed to provide an explicit timeline on tapering balance sheet purchases, as some hoped for. The policy statement did include new language stating that tapering “may soon be warranted.” That sets up the path for it later this year, perhaps in November or December, while leaving the central bank an exit plan in case economic conditions worsen.

Australia saw flash purchasing managers’ index data from Markit Economic cross the wires this morning. The September preliminary services PMI rose to 44.9 from 42.9 in August. PMI for the manufacturing sector accompanied the data, with the index climbing to 57.3 from 52.0. While the services sector remains in contractionary territory (under 50), the slower pace of contraction hints that a recovery in the sector may be underway.

The rest of the day is rather void of high-impact economic events. Japan will see foreign bond investment numbers for the week ending September 18. Later today, Thailand’s trade figures for August are set to drop at $854 million, according to a Bloomberg survey. The Philippines central bank is expected to keep its benchmark rate on hold at 2%.

The week has been rather busy for central bank decisions. The Central Bank of Brazil hiked its benchmark rate by 100 basis points earlier today as policymakers combat rising inflation brought on by a severe and prolonged drought across the county. That drought has caused havoc in prices across its energy and agricultural markets.

AUD/USD is struggling below a descending trendline from July after breaking lower from a Falling Wedge. The 61.8% Fibonacci retracement from the August/September move also appears to be providing a layer of confluent resistance. However, a Bullish Engulfing candlestick yesterday may hint at upward momentum. Moreover, the MACD line is crossing above the signal line, a bullish sign in the oscillator. 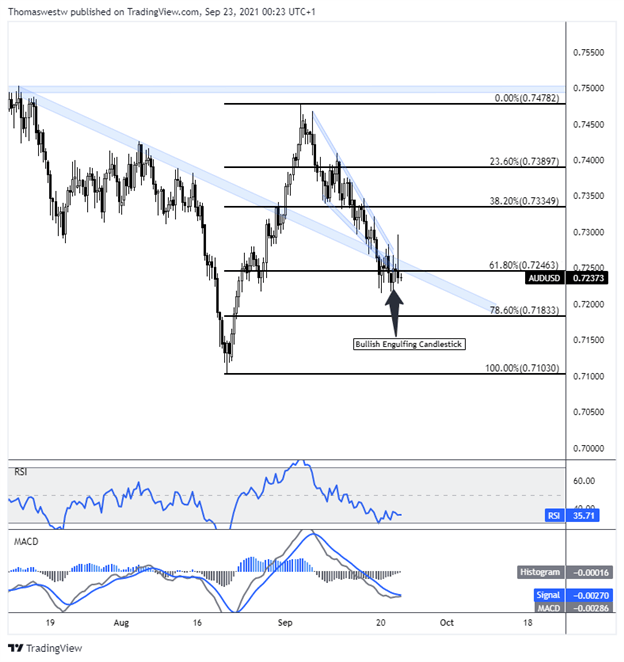