Joe Biden backed the Federal Reserve’s shift towards tighter monetary policy to fight inflation as the US president opened his first formal press conference in several months with a vow to rein in higher prices afflicting the economic recovery.

“Given the strength of our economy and the pace of recent price increases, it is appropriate, as Fed chairman [Jay] Powell has indicated, to recalibrate the support that is now necessary,” Biden said, adding that he supported the central bank’s independence.

Biden faced the media on Wednesday afternoon in a bid to sell his accomplishments and battle declining public approval ratings on the eve of the first anniversary of his inauguration.

His press conference at the White House came at a time when the president is facing several crises at home and abroad, including the lingering coronavirus pandemic, a sharp rise in consumer prices and the ongoing threat of Russian aggression in Ukraine.

“For all this progress, I know there’s a lot of frustration and fatigue in this country,” Biden acknowledged. For many, the enduring pandemic was “too much to bear”, the president said. But he added that the White House was doing its best to tackle the problem, rebutting accusations that his administration underestimated the surge of the Omicron variant.

On inflation, Biden pointed directly at the Fed as the agency with the most direct responsibility for tackling high prices. But he also said the White House’s economic plans, which are stalled in Congress, and a more aggressive approach to competition policy, would help rein in the problem.

“I’m confident we can get . . . big chunks of the Build Back Better signed into law,” he said of his $1.75tn spending package.

The latest Gallup polling shows 40 per cent of Americans approve of the job Biden is doing, with 56 per cent disapproving. That compares to a 38 per cent approval rating for Donald Trump one year into his presidency, and a 49 per cent approval for Barack Obama at the same point in his tenure.

Democrats fret that the low approval ratings could spell disaster for their party in this year’s midterms, when control of both the House of Representatives and the Senate will be up for grabs. Biden’s party at present controls both chambers of Congress by the slimmest of margins.

The press conference marks one of his first big appeals to the American public in 2022. The president’s State of the Union address has been scheduled for the relatively late date of March 1.

Biden started his presidency with broad public support, but his approval rating started slipping over the summer amid a chaotic withdrawal of troops from Afghanistan that tested the country’s alliances abroad and cast doubt in the eyes of many Americans. 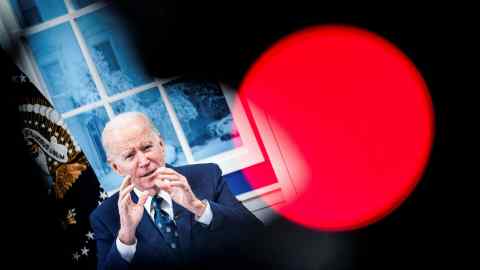 More recently, the White House has struggled to project a strong handling of the economy, with rising petrol prices and record inflation. The latest official figures showed US consumer price growth rose at the fastest pace in almost 40 years in December.

At the same time, Biden’s legislative agenda has stalled on Capitol Hill, after the president and congressional leaders failed to shore up support for his Build Back Better social safety net package and voting rights legislation. Democrats’ voting rights ambitions are likely to fail at a crucial procedural hurdle on Wednesday evening.

Supporters argue Biden and the White House have failed to effectively sell their accomplishments to date, including a $1.9tn Covid relief bill and a sweeping $1.2tn infrastructure package.