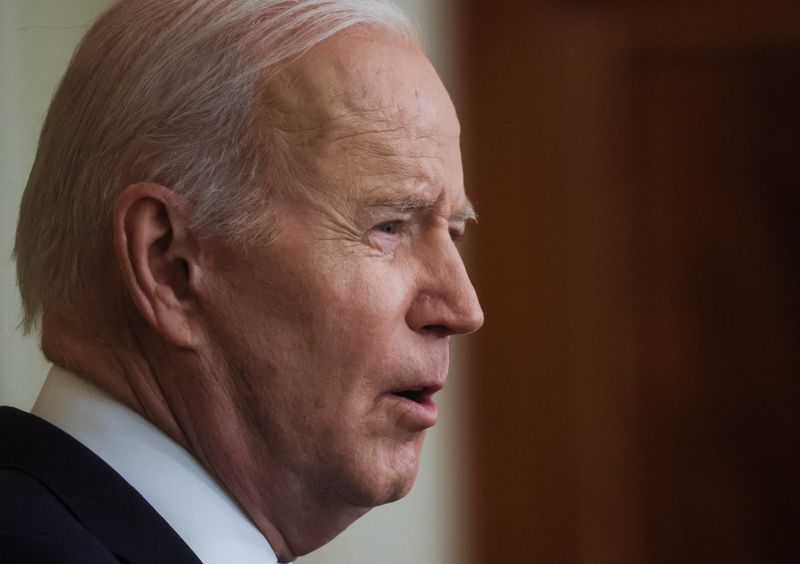 By Alexandra Alper and Karen Freifeld

WASHINGTON (Reuters) -The Biden administration announced sweeping export restrictions against Russia on Thursday, hammering its access to global exports of goods from commercial electronics and computers to semiconductors and aircraft parts.

The controls, announced by the Commerce Department and first reported by Reuters, rely on a dramatic expansion of the so-called Foreign Direct Product Rule, forcing companies making high- and low-tech items overseas with U.S. tools to seek a license from the United States before shipping to Russia.

The measures also instruct the Commerce Department to deny almost all of those license requests.

In a White House speech announcing the new controls, President Joe Biden said they would “impose severe costs on the Russian economy both immediately and over time,” noting that allies including 27 members of the European Union such as France, Germany and Italy, as well as the United Kingdom, Canada, Japan, Australia and New Zealand, had joined in the response to maximize its impact.

“Between our actions and those of our allies and partners, we estimate that we will cut off more than half of Russia’s high-tech imports,” he said.

Biden’s announcement came as Ukrainian forces battled Russian invaders around nearly all of the country’s perimeter on Thursday after Moscow mounted an assault by land, sea and air in the biggest attack on a European state since World War Two.

Under the export curbs announced on Thursday, U.S. suppliers would also have to obtain licenses for certain Russia-bound items that do not currently require them, such as civil aircraft parts.

Those license applications, in turn, will face a strict “policy-of-denial” standard of review, meaning only in rare cases would the administration approve them.

By far the most sweeping measure is the expansion of the Foreign Direct Product Rule, or FDPR, for Russian buyers. The move takes a page from restrictions placed on Chinese telecom giant Huawei Technologies Co Ltd under then-President Donald Trump.

“This is the most complex export control rule ever written,” former Commerce Department official Kevin Wolf said. “Many companies may choose to simply avoid dealing with Russia to avoid the potential for a mistake.”

Under the new measures, Russian companies listed as so-called military end users for their alleged ties to the Russian military, including a handful of aircraft producers, will be added to a trade blacklist known as the entity list. That will broaden the scope of items the companies would need licenses to obtain.

Washington is also using an additional expansion of the FDPR to dramatically broaden the scope of products that would need approval from the United States when sent to Russian military end users. It subjects to U.S. license requirements to all items made abroad with U.S. tools and destined for companies that support the Russian military.

The measures includes carveouts for consumer items such as household electronics, humanitarian goods, and technology necessary for flight safety. Consumer communications devices, like cell phones, are also permitted as long as they are not sent to Russian government employees or certain affiliates.

Cordell Hull, a former Commerce Department official, predicted the rules, though “significant,” would be difficult to enforce.

Speaking at a virtual event hours before the rules were published, Matthew Axelrod, the Commerce Department’s Assistant Secretary for Export Enforcement, vowed to “enforce those severe sanctions aggressively.”

The export curbs were coupled with fresh sanctions against major Russian banks, including the country’s two largest lenders, Sberbank and VTB, aimed at limiting Russian access to the U.S. financial system.