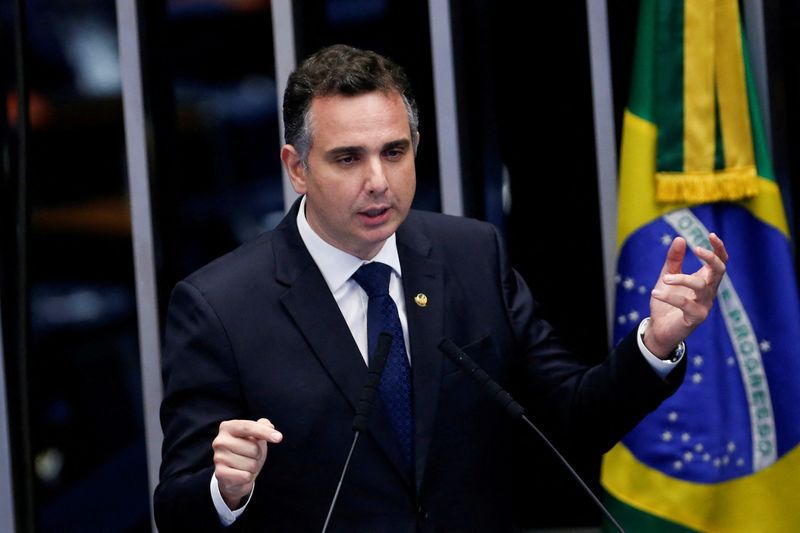 © Reuters. Senator Rodrigo Pacheco speaks during a senate session to elect the president of the Brazilian Senate in Brasilia, Brazil February 1, 2021. REUTERS/Adriano Machado

BRASILIA (Reuters) – Brazilian Senate president Rodrigo Pacheco said on Wednesday that bills to curb rising fuel prices would be on the table next week amid renewed pressure on prices after Russia’s invasion of Ukraine.

“More than ever, in the face of rising oil prices, we need to take steps to stop fuel prices from going up,” he wrote on Twitter (NYSE:), as crude prices surged past $110 a barrel.

One of the projects mentioned by Pacheco creates a stabilization fund for fuel prices, while the other changes the ICMS state tax calculation rules. According to the head of the upper chamber, both will be “on the Senate agenda” next week.

The sharp rise in fuel prices has contributed to double-digit inflation in Latin America’s largest economy. President Jair Bolsonaro, who seeks to boost his popularity ahead of elections in October, has already signaled support for proposals to cut taxes on fuels.

Economy Minister Paulo Guedes is firmly against the stabilization fund, but favors changes to the ICMS calculation. He has argued that measures could backfire if they weaken the real currency, which would push up imported products, inflation and interest.

In command of one of the most aggressive monetary tightening policies in the world, the Brazilian central bank has also said that short-term measures to tackle inflation could put upward pressure on prices over the longer term.