Before Brexit, lorry driver Patrick Kirwan would have typically taken his load of frozen meat from France to Northern Ireland on the quick ferry across the English Channel, followed by a drive across Britain and then an Irish Sea sailing — but on a cold winter night in February he was preparing to take the 17-hour ferry trip direct to Ireland from the Normandy port of Cherbourg.

“I’d say it’s because of the paperwork,” he explained from the cab of his O’Donovan truck at the docks. Northern Ireland, which is part of the UK, remains in the EU’s trade area under the terms of the Brexit deal agreed in December.

The UK’s departure from the EU on January 1 at the end of the Brexit transition period, and the resulting customs and health controls at the borders, immediately diverted trade between Ireland and the rest of the EU away from the UK “land bridge”. The ferry leaving Cherbourg on Thursday night for the Irish port of Rosslare had a full load of more than 100 trailers and trucks, while the nearby vessel bound for Portsmouth in England was less than one-fifth full.

The surge in demand for the routes linking the island of Ireland to the rest of the EU has fuelled a Brexit boom at French ports such as Cherbourg, Dunkirk and Roscoff, and at Rosslare in south-eastern Ireland.

We were ready for this and set to double our activity, but the thing is we haven’t doubled it, we’ve tripled it

“There was a tremendous shift in traffic with Brexit — and the paperwork — and the realisation that D-Day was finally here,” said Glenn Carr, general manager at Rosslare port.

As a gale blows in from the chilly sea, Carr explains how the port, which “hadn’t seen growth for a long number of years”, has taken the benefit of a sudden jump in traffic and freight volumes.

“We went from three services [each way] last January to now today doing 16 sailings a week, which is 32 services to and from Rosslare to Europe,” he said.

“We were ready for this and set to double our activity, but the thing is we haven’t doubled it, we’ve tripled it,” said Yannick Millet, director of the Cherbourg port, developed since the 17th century as a strategic asset to counter British power. He is hiring extra dock workers to handle the traffic.

The UK land bridge was previously popular with Irish traders because it provided the fastest and cheapest access to continental markets, but many have now opted to take longer direct sailings because of anxiety about delays at British ports and the onerous new paperwork.

“We were expecting all these difficulties,” said Jean-Marc Roué, chairman of Brittany Ferries in Roscoff. “The worst was avoided with the December 24 [UK-EU trade] deal, but even so life has changed. No tariffs are charged, but that doesn’t stop the need for customs declarations.”

He recalled that before Brexit, truckers heading to the UK “arrived three minutes before the boat left and if the ferry wasn’t full you got on. Crossing the Channel was easier than crossing to the Ile de Ré [a French holiday island linked to the mainland by a bridge] in August.”

Data from January suggest that more than half the 150,000-170,000 annual trips that previously used the land bridge will now take the direct sea route between Ireland and France, although temporary travel restrictions because of the Covid-19 pandemic may also have contributed to the change. Carr said Rosslare could yet take 80,000 freight units a year from the land bridge, including vehicles carrying loads to and from Northern Ireland. “We’re seeing trucks that we’ve never seen before.”

UK shipments, on the other hand, have dropped. Rosslare, long a secondary port behind Dublin, reported a 49 per cent fall in January, in line with the overall 50 per cent decrease in Irish-UK trade since the start of the year. 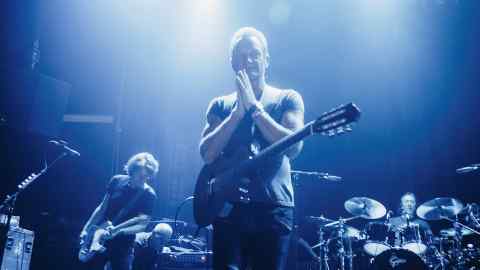 Traffic between France and the UK has also dropped since the start of the year, with many of the Cherbourg ferry services reserved by the UK government under its £77m scheme to ensure vital supplies post-Brexit running almost empty, according to port officials and ferry companies.

For truckers who made their living for decades driving through Britain, this is an abrupt change. “Since January we’re going direct now all the time unless we have work in England,” said Dave Reynolds, a driver with an Irish group that ships freight “as far north as the Arctic Circle”.

At a truck stop an hour from Rosslare where the Irish government has set up a coronavirus testing station for drivers who need a negative test to enter France, Reynolds said there had been a huge decline in use of the UK land bridge. “If we have to go to the UK we go to the UK. Otherwise we bypass it completely.”

Driver Terry Walsh, speaking in Cherbourg on his way to Newry in Northern Ireland with a load of second-hand tractors from Spain, agreed. “I think people prefer going direct, though the cheapest route is through the UK.”