Catalonia’s separatist parties strengthened their majority in the region’s parliament in elections on Sunday, although the anti-independence Socialists won more votes than any other single party.

With 99 per cent of the vote counted, the election resulted in a virtual three-way tie between the Socialists and two pro-independence parties, the Catalan Republican Left (ERC) and Together for Catalonia.

When votes for other separatist parties were included, the pro-independence camp appeared to have won just above 50 per cent of the vote, on a low turnout — and to have secured an increased majority in the parliament.

“The time has come to negotiate an independence referendum,” said Pere Aragonès, the candidate of the ERC, which equalled the Socialists’ tally of 33 seats in the 135-seat regional parliament, despite lagging slightly behind in votes. “For the first time the independence movement has won more than 50 per cent of the vote.”

Spain’s Socialist-led minority government, which has relied on the ERC to win votes in the national parliament, has ruled out such a referendum, and the Spanish constitution states that the country is “indivisible”.

Change has arrived in Catalonia to stay

The election also represented a victory for the hard-right Vox party, which came fourth in the vote, and the radical separatist CUP party, which more than doubled its representation.

But it was little short of a disaster for the centre-right People’s party, Spain’s main opposition group, which recorded its worst ever election result, with less than 4 per cent of the vote, and for the centrist Ciudadanos group, which topped the poll in the last elections, in 2017, but whose representation collapsed from 36 deputies to six.

“Change has arrived in Catalonia to stay,” declared Salvador Illa, who was tapped as a Socialist candidate after serving as health minister during the pandemic and whose campaign appeared to bolster his party’s support.

Illa hailed the Socialists’ “very clear victory”, in which the party netted 23 per cent of the vote and almost doubled its number of seats in the regional parliament.

But although he said he would put himself forward as a candidate to head the regional government, the separatist parties, which will have an absolute majority of 74 seats between them, have signed a compact ruling out any deal to form a government with the Socialists.

Aragonès, who last week told the Financial Times in an interview that he was looking to the example of the Scottish independence movement, will also seek the regional parliament’s backing to form an administration. He appears to have the votes to do so, despite tensions within the independence camp during the last legislature. 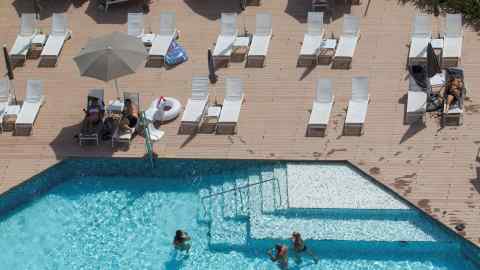 The rise of the separatist movement over the past decade has transformed Spanish politics, leading to confrontation with Madrid, notably in October 2017, when regional authorities held an unconstitutional independence on referendum and the Catalan parliament subsequently issued a unilateral declaration of independence — events that led to jail sentences for separatist leaders.

Carles Puigdemont, the Catalan leader at the time, fled to Belgium rather than face trial. On Sunday, his Together for Catalonia party, which takes a more confrontational approach to Madrid than the ERC, came third, with 32 seats and 20 per cent of the vote. The region’s electoral system awards proportionally greater representation for rural separatist strongholds than the Socialists’ urban bastions.

Sunday’s elections took place in less charged circumstances than the December 2017 vote, with the participation rate plummeting from 79 per cent to 53.5 per cent. Because of the pandemic, voting was organised into shifts, with people deemed at risk voting first, followed by the general population, and then people who have tested positive last of all.