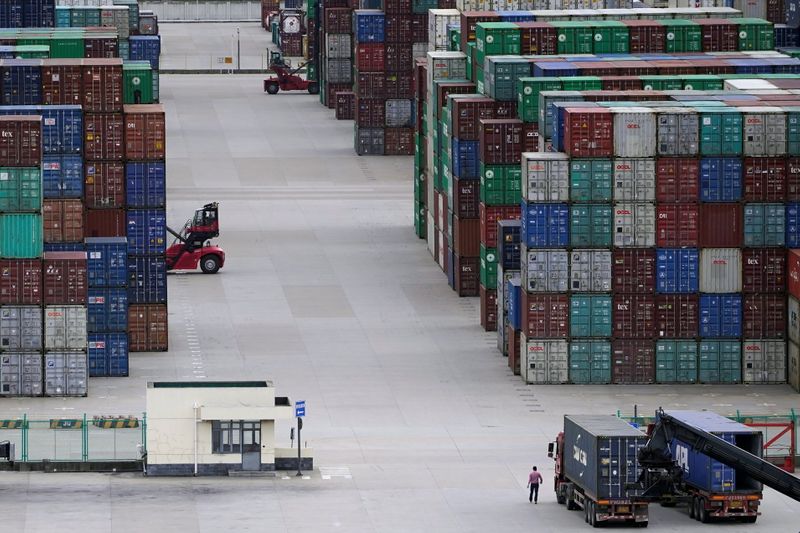 BEIJING (Reuters) -China’s export growth slowed in October but beat forecasts, helped by booming global demand ahead of winter holiday seasons, an easing power crunch and an improvement in supply chains that had been badly disrupted by the coronavirus pandemic.

Outbound shipments jumped 27.1% in October from a year earlier, slower than September’s 28.1% gain. Analysts polled by Reuters had forecast growth would ease to 24.5%.

Zhiwei Zhang, chief economist at Pinpoint Asset Management, said the strong exports would help to mitigate the weakening domestic economy, and give the government greater room for manoeuvre on economic policy.

“The government can afford to wait until the year-end to loosen monetary and fiscal policies, now that exports provide a buffer to smooth the economic slowdown,” he said.

Recent data has pointed to a slowdown in manufacturing. Factory activity shrank for a second month in October, an official survey showed, while growth in industrial output eased to the lowest since March 2020 – the first wave of the pandemic.

However, under heavy government intervention, some supply constraints have started to ease in recent weeks, including a power crunch that had been triggered by a shortage of coal, tougher emission standards and strong industrial demand.

Premier Li Keqiang said on Tuesday the government would take measures to support the industrial sector as the economy faces renewed downward pressures.

Imports jumped 20.6% in October from a year earlier, accelerating from a 17.6% gain in September but well below expectations for a rise of 25%.

Goldman Sachs (NYSE:) data showed the value of imports grew 56.3% year-on-year, up from 34.9% in September, and the value of coal imports rose 292% on-year, accelerating further from a 234% gain in September, as the global energy crunch and post-COVID economic recovery drove up commodity prices.

China posted a trade surplus of $84.54 billion last month, the highest on record. It was also above the poll’s forecast of $65.55 billion and September’s $66.76 billion surplus.

The world’s second largest economy grew 4.9% in the July-September quarter from a year earlier, the weakest reading since the third quarter of last year.

China’s trade surplus with the United States was $40.75 billion in October, Reuters calculations based on customs data showed, down from $42 billion in September.

U.S. Trade Representative Katherine Tai pledged last month to exclude some Chinese imports from tariffs while pressing Beijing over its failure to keep some promises made in a “Phase 1” trade deal made under the Trump administration.