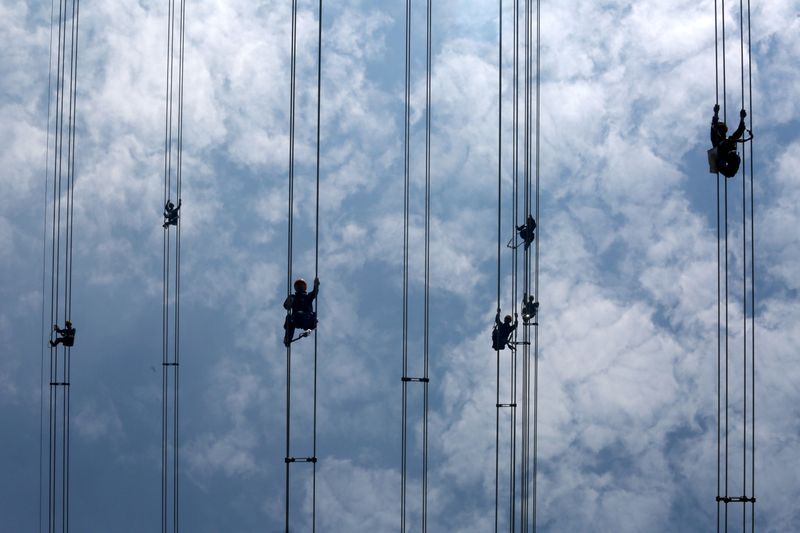 By Shivani Singh and Min Zhang

BEIJING (Reuters) – Widening power shortages in China have halted production at numerous factories including many supplying Apple (NASDAQ:) and Tesla (NASDAQ:), while some shops in the northeast operated by candlelight and malls shut early as the economic toll of the squeeze mounted.

China is in the grip of a power crunch as a shortage of coal supplies, toughening emissions standards and strong demand from manufacturers and industry have pushed coal prices to record highs and triggered widespread curbs on usage.

Rationing has been implemented during peak hours in many parts of northeastern China since last week, and residents of cities including Changchun said cuts were occurring sooner and lasting for longer, state media reported.

The power crunch has hurt production in industries across several regions of China and is dragging on the country’s economic growth outlook, analysts said.

The impact on homes and non-industrial users comes as night-time temperatures slip to near-freezing in China’s northernmost cities. The National Energy Administration (NEA) has told coal and firms to ensure sufficient energy supplies to keep homes warm during winter.

The city of Huludao told residents not to use high energy-consuming electronics like water heaters and microwave ovens during peak periods, and a resident of Harbin city in Heilongjiang province told Reuters that many shopping malls were closing earlier than usual at 4 p.m. (0800 GMT).

Given the current power situation “the orderly use of electricity in Heilongjiang will continue for a period of time,” CCTV quoted the provincial economic planner as saying.

The power squeeze is unnerving Chinese stock markets at a time when the world’s second-largest economy is already showing signs of slowing.

China’s economy is grappling with curbs on the property and tech sectors and concerns around the future of cash-strapped real estate giant China Evergrande.

Tight coal supplies, due in part to a pickup in industrial activity as the economy recovered from the pandemic, and toughening emission standards have driven the power shortages across China.

China has vowed to cut energy intensity – the amount of energy consumed per unit of economic growth – by around 3% in 2021 to meet its climate goals. Provincial authorities have also stepped up the enforcement of emissions curbs in recent months after only 10 of 30 mainland regions managed to achieve their energy goals in the first half of the year.

China’s focus on energy intensity and decarbonization is unlikely to abate, analysts said, ahead of COP26 climate talks – as the 2021 United Nations Climate Change Conference is known – which will be held in November in Glasgow and where world leaders will lay out their climate agendas.

The power pinch has been affecting manufacturers in key industrial hubs on the eastern and southern coasts for weeks. Several key suppliers of Apple and Tesla halted production at some plants.

At least 15 Chinese companies have said in exchange filings that production had been disrupted by power curbs, while more than 30 Taiwan-listed firms with China operations had stopped work to comply with the power limits.

The steel, aluminium and cement industries have also been hard hit by the output curbs, with about 7% of aluminium production capacity suspended and 29% of national cement production affected, Morgan Stanley (NYSE:) analysts wrote in a Monday note. Paper and glass could be the next industries to face supply disruptions, they said.

Producers of chemicals, dyes, furniture and soymeal have also been affected.

The fallout of the power shortage has prompted some analysts to downgrade their 2021 growth outlook.

“The power-supply shock in the world’s second-biggest economy and biggest manufacturer will ripple through and impact global markets,” analysts at Nomura said in a Sept. 24 note, warning that global supplies of textiles, toys and machine parts could be affected.

China, the world’s biggest energy consumer and source of climate-warming greenhouse gas, has said it aims to bring carbon emissions to a peak by 2030 and to net zero by 2060.