Military tension around Taiwan increased on Monday as China sent a record 52 warplanes into the country’s air defence identification zone after the US and five of its allies held a large naval exercise east of the island.

The incursion, which included 36 fighters and 12 nuclear-capable bombers, marked the third time in four days that the People’s Liberation Army Air Force set a new record for flying into Taiwan’s air buffer zone. The flights on Monday brought the total number of such missions to 145 since Friday.

Taiwanese officials said that while the Chinese aircraft that entered its Adiz on Monday appeared engaged in an exercise aimed at the US and its allies, the scale of the PLA activity near Taiwan had reached a dangerous level.

“This is getting close to the brink of conflict,” one senior Taiwanese official told the Financial Times.

According to Japan’s Maritime Self Defense Force, the navies of the US, Japan, the UK, Canada, the Netherlands and New Zealand conducted a large exercise involving three aircraft carriers and 14 other warships on Saturday and Sunday south-west of Okinawa.

Two people familiar with the situation said the Chinese aircraft were simulating attacks on some of the naval vessels that had participated in the joint drill and were on their way home or to new missions.

“This activity is destabilising, it risks miscalculations, and it undermines regional peace and stability. We strongly urge Beijing to cease its military, diplomatic, and economic pressure and coercion against Taiwan,” said Ned Price, state department spokesperson. 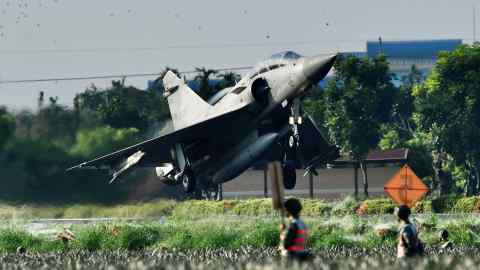 Some analysts have suggested that the rising tempo was related to the PLA finishing a training cycle, while others said China was making a point around October 1, the anniversary of the founding of the People’s Republic of China, and ahead of Taiwan’s own national day on October 10.

Bonnie Glaser, a China expert at the German Marshall Fund, said the Chinese flights were also designed to test Taiwan’s response time and to wear down its air force. But she said the flights were not a prelude to war, pointing out that they were occurring in international air space.

Ivan Kanapathy, a China expert who served at the National Security Council during Donald Trump’s administration, said there was too much focus on the PLA flights given the other military assets China had directed at Taiwan.

“Elements within both China and Taiwan benefit from the narrative that these particular training operations violate international norms or represent a direct or immediate military threat to Taiwan. It’s not clear that either is true,” said Kanapathy, now at the Center for Strategic and International Studies.

“As a matter of perspective, the PLA is continuing to improve on the roughly 2,000 surface-to-surface missiles that can strike Taiwan from the mainland with minimal warning.”

The soaring tension comes as the US and several of its allies and partners are stepping up defence co-operation in the Indo-Pacific in response to China’s increasingly aggressive use of its growing military capabilities.