The president of the European Central Bank said it was unlikely eurozone interest rates would increase next year, calling the current rise in inflation a passing “hump”, but added that the ECB would act swiftly if needed to staunch the increase in prices.

Despite eurozone inflation hitting a record high of 4.9 per cent in November, well above the ECB’s target of 2 per cent, Christine Lagarde said it was likely to have peaked and would decline next year.

“I see an inflation profile that looks like a hump . . . and a hump eventually declines,” she said at a Reuters virtual event. Lagarde also repeated her assertion that the ECB was “very unlikely” to raise interest rates next year.

Her comments contrast with a recent policy shift at the US Federal Reserve, whose chair Jay Powell this week said it would speed up the withdrawal of its bond purchases to fight soaring inflation, fuelling expectations that it was likely to raise rates next year.

Lagarde said it was too early to say what impact the Omicron coronavirus variant would have on Europe’s recent economic recovery and on inflation. “We have to wait for the scientists to tell us [more about the variant],” she said.

“But equally, we need to very clearly indicate that we stand ready [to act] in both directions,” she added. Once inflation is on track to stay above 2 per cent for the next few years, fulfilling the conditions set by the ECB for rates to rise, she said the bank “would not hesitate to act”.

Some economists have said the new variant could mean inflation stays higher for longer as fresh restrictions disrupt trade and shift demand from services to goods, worsening supply chain bottlenecks that have pushed up prices around the world.

However, Lagarde said 55 to 60 per cent of recent inflation came from soaring energy prices and there was “reason to believe that by the end of 2022 it will have declined significantly”.

Given the rising uncertainty over the economic impact of the pandemic, Lagarde also said the central bank’s policymakers were unlikely to make any long-term policy pledges when they meet in two weeks.

The recent surge in Covid-19 cases and the spread of the Omicron variant have made some ECB policymakers reluctant to commit to maintaining its stimulus for a long period when they meet on December 16, especially after inflation consistently overshot their forecasts this year.

Some conservative “hawks” at the ECB have said it could end all asset purchases next year, much earlier than many investors expect.

Klaas Knot, head of the Dutch central bank, said on Friday the ECB could raise rates in 2023 if inflation stays higher than expected next year. 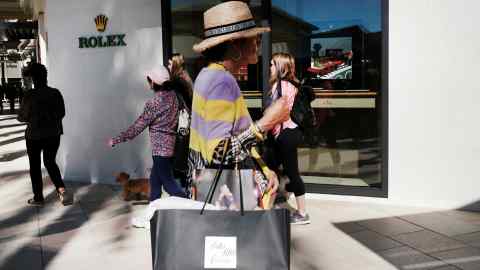 Lagarde said new bond purchases under its flagship €1.85tn pandemic emergency purchase programme were still expected to end in March, but she added that the ECB had other tools available to “ensure conditions remain favourable” after that point.

She said the ECB could still “act on markets” by reinvesting the proceeds of maturing bonds and by continuing new purchases under its traditional asset purchase programme, which some investors expect to be expanded from its current pace of €20bn a month.

Eurozone unemployment, which is close to pre-pandemic levels after dipping to 7.3 per cent in October, was higher than in the US and there were fewer signs of labour shortages or widespread cases of people leaving the workforce in Europe, Lagarde said.