Sign up to myFT Daily Digest to be the first to know about BT Group Plc news.

An agreement between the two companies could be struck within weeks, according to multiple people with direct knowledge of the talks. It would enable the telecoms company to exit sports broadcasting and focus on expanding its 5G and full-fibre networks and developing new connectivity services.

A deal would reshape the UK broadcasting landscape after nearly a decade of rampant competition between Sky and BT in both the sports and broadband markets. DAZN has proved to be an emerging threat and this year it outbid Sky Italia for the rights to broadcast Serie A games as part of a €2.5bn deal.

The streaming company would net high-profile English Premier League games to bolster its fledgling UK business as well as rugby union, some cricket rights and niche sports including Australian Rules Football if it takes over the BT unit.

Kevin Mayer, chair of DAZN, told a media conference last week that the streaming company would ultimately “love” to have rights to the Premier League and that it was “possibly” interested in acquiring BT Sport which he described as a “great business”.

There is no certainty a deal will be struck, however, with negotiations over a number of factors including price, which could be in the region of hundreds of millions of pounds, and a licensing agreement between the two companies still under way. 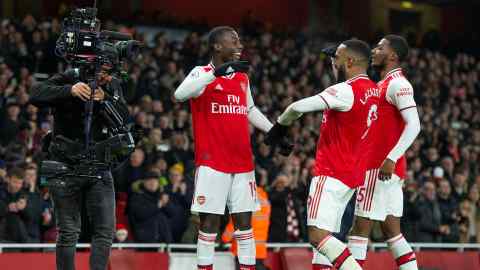 A sale is complicated by a cross-licensing deal that BT has with Sky, meaning the satellite broadcaster has to approve the deal. The two companies have held talks over a potential change in ownership.

BT could still opt to partner with another player on sports broadcasting or keep the business in-house.

Talks have been taking place with a number of interested parties for more than six months after the telecoms company appointed investment bank Lazard to explore options for the business.

BT and DAZN declined to comment on the talks.

BT proved to be the most formidable competitor to Sky in sports broadcasting after investing more than £2bn to take the fight to the media company. Its strategy was to build a viable sports business alongside its TV service but also to defend its core broadband base against Sky, which had been offering free broadband to its sports subscribers.

It has sought to reduce the financial burden of its sports operation in recent years and under Marc Allera, chief executive of BT’s consumer unit, has transformed a division that lost £400m a year in its infancy into a break-even business with almost 2m subscribers.