Moderate Democrats are pushing the Federal Reserve to move more aggressively towards tighter monetary policy to stamp out inflation, in a sign of their mounting concern about the political fallout from high prices.

The pressure on the US central bank from the centrist wing of the Democratic party has increased ahead of next week’s Federal Open Market Committee meeting, during which the Fed is expected to announce a more rapid drawdown of its asset purchases, setting the stage for possible interest rate increases later next year.

It reflects growing unease within Joe Biden’s party that high inflation could prove toxic with voters in the 2022 midterm elections — and will not be reined in soon enough by his $1.75tn childcare and climate change legislation, whose structural reforms to the economy will only have an impact in later years.

“The Fed needs to start tapering immediately and then they need to raise interest rates. Both those things can be done by March,” Jake Auchincloss, a Democrat from Massachusetts and member of the House of Representatives financial services committee, which oversees monetary policy, told the Financial Times.

“I think chair [Jay] Powell would do well to end the decade of easy money,” he added.

The Democratic debate over inflation keeps intensifying at every new data release. In November the consumer price index rose by 6.8 per cent compared to a year earlier, its fastest pace since 1982.

Biden on Friday acknowledged that inflation had been a “real bump in the road”, though White House officials still expect prices to ease and are glad that petrol costs have begun to decline.

When the US president appointed Powell for a second term as Fed chair, Biden suggested he believed he was the best person to tackle inflation, but the White House is not commenting on specific central bank policies.

If inflation threatens the economy and the prospects of Democrats in elections, there are going to be a lot fewer doves out there

Vocal support for tighter monetary policy is still relatively rare from Democrats. The party has long emphasised the need for the Fed to maintain as much support for the recovery as possible in order to fully honour its mandate to pursue full employment that would benefit all segments of the population. Some key Democrats still suggest that should be the priority.

“At this moment, when workers are finally gaining bargaining power, we need to continue pushing for full employment and a job market where companies compete for workers by offering higher wages and better benefits,” Sherrod Brown, the chair of the Senate banking committee, and an Ohio Democrat, said in a statement to the FT.

“The Fed should make sure our economy works for workers and their families, not Wall Street,” he added.

But others are calling for the central bank to move faster on inflation.

Joe Manchin, the Democratic senator from West Virginia, is an unabashed critic of the Fed’s bond-buying, and Mark Warner, the Democrat from Virginia, suggested to Powell that he should speed up the “tapering” of asset purchases during a hearing last month.

“I I believe that tapering, and frankly accelerating it, can kind of serve as an insurance policy if . . . we see this potential overheating of the economy,” Warner said on November 30.

Ian Katz, an analyst at Capital Alpha Partners, said the shift was not surprising given the political pressures facing Democrats. “If inflation threatens the economy and the prospects of Democrats in elections, there are going to be a lot fewer doves out there,” he said.

One Democratic congressional aide in the Senate said many Democrats, as well as the White House, were taking inflation more seriously as they recognised this was a new “political moment”.

“In prior cycles, we have always talked about more jobs, better paying jobs. We have both of those now. But to many voters it don’t feel [like it]. The money in their pockets isn’t stretching as far.” 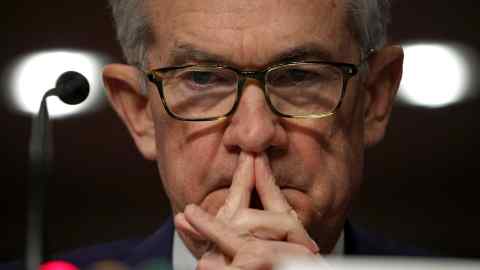 The growing Democratic hawkishness is taking a variety of forms — including renewed criticism that loose Fed policies are driving disparity. Jon Ossoff, the Democratic senator from Georgia, pressed Powell about what specific economic purpose the bond-buying programme serves at a time when aggregate demand is “quite strong” and capital markets are “highly liquid”.

“Does it not for example, while it provides additional liquidity to capital markets, worsen inequality by driving up equity and asset valuations and shifting more cash on to the balance sheets of major financial institutions, high net worth individuals and investors?” Ossoff asked.