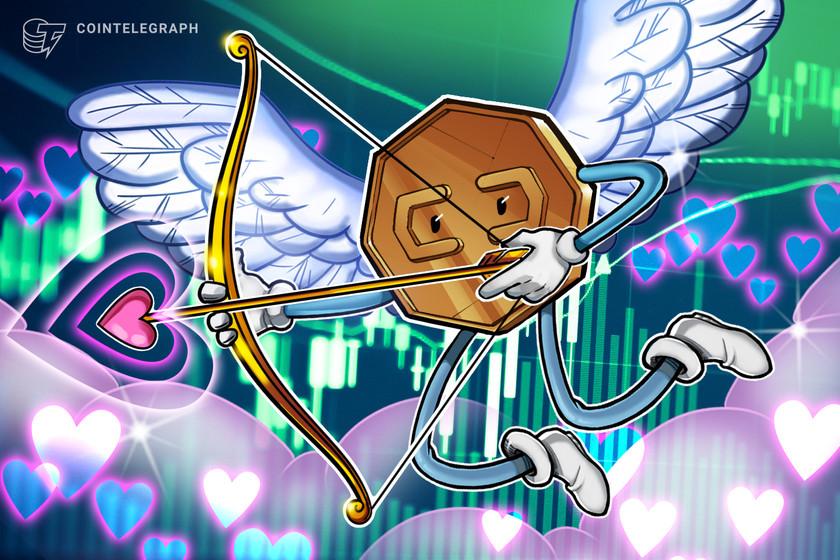 Cryptocurrency has become one of the most widely discussed topics of 2022. As such, it shouldn’t come as a surprise that mentioning “crypto” in an online dating profile may generate additional attention.

A new study from brokerage firm eToro found that 33% of Americans who were surveyed would be more likely to go on a date with someone who mentioned crypto assets in their online dating profile. Out of the 2,000 adult residents in the United States between the ages of 18 and 99 surveyed, more than 40% of men and 25% of women indicated that their interest in a potential date is stronger when crypto is written on a dating profile.

Crypto: What’s love got to do with it?

Callie Cox, U.S. investment analyst at eToro, told Cointelegraph that the findings from eToro’s inaugural “Crypto & Culture” survey demonstrate the crossover between money, culture and identity. “We talked a lot about identity in the survey and how this has a strong place in the crypto community. The genesis of this campaign was to better understand how people think of big life projects and finding that perfect partner,” said Cox.

With this in mind, Cox explained that one of the most notable findings in the report was that 33% of respondents would be open to dating someone who mentioned crypto in their profile. “This shows there is a connection between money, love and identity when people look for a partner on a dating app,” she remarked. Cox added that it was also interesting to see that nearly 74% of survey respondents noted they would likely go on a second date with a person who paid the first date’s bill in Bitcoin (BTC). “We also wanted to test the environment to see how people felt about using crypto as a currency. We were surprised to see this percentage so high, which also speaks to identity.”

While these findings suggest that publicly open crypto holders and enthusiasts may attract more attention across dating apps, Cox shared that Millennials and Gen Z respondents were the majority of people who participated in the survey. “Everyone had to self-identify and most of the respondents were from the younger generation,” she said. Regarding using crypto as a currency, Cox further mentioned that eToro’s findings show that paying a bill in Bitcoin is of greater interest to men than to women.

The crypto community and online dating

Although eToro’s survey suggests that crypto terminology may make daters more desirable, some crypto community members find mentioning the trait to be a double-edged sword.

For instance, Hailey Lennon, law partner at Anderson Kill and founder of Crypto Connect, told Cointelegraph that she didn’t initially have “Bitcoin” anywhere in her online dating profile, but that she eventually added it since the digital asset has been a long-time passion of hers. While Lennon didn’t notice an increase in responses to her profile from adding Bitcoin, she’s had some matches that have piqued her interest due to commonalities:

“There is a commonality between people that are interested in Bitcoin. For example, if I post a photo in a Bitcoin hat, that will likely attract others interested in the space. I’ve also jokingly tweeted before when I find someone with ‘Bitcoin’ mentioned in their dating profile that I’ve found my soulmate. But, it really does show a common interest and that we can connect and talk about a common passion.”

However, Lennon also pointed out that including crypto terminology in your online dating profile can backfire. “Sometimes I will reframe things and say that I’m an attorney in financial technology, without mentioning Bitcoin or cryptocurrency to not make the entire conversation become about Bitcoin and what I do for a living. You also have those people who still associate cryptocurrency with this false narrative of it being used only for criminal activity and money laundering, so it can be interesting to try to explain how you are a lawyer in the digital asset space,” said Lennon.

Moreover, while Lennon finds eToro’s survey results to be interesting, she noted that many people in the crypto community focus so much on digital assets in their day-to-day lives that they may want to have non-crypto-focused conversations in romantic settings. “Sometimes a date can only consist of wanting to talk about Bitcoin and how it works when people find out what you do for a living. That can get kind of old and take the romance/fun out of the date.”

Echoing this, Ivan Perez, owner at Multiplied — a crypto-focused PR firm — told Cointelegraph that since adding “investing and working in crypto” to his online dating profiles, he’s connected three times with women who also work in the cryptocurrency space. While Perez mentioned that the commonality can be an added plus, he shared that each date he went on with someone in the crypto sector felt more like work than pleasure. “All we did was talk about crypto,” expressed Perez.

Perez further explained that having “crypto” in his online dating profile has also attracted the wrong attention at times:

“Some girls will like my profile and then start off by saying ‘you work in crypto, how cool.’ Then, when we go on a date, the first 10–20 minutes usually focus on how crypto works and what I do. Some women focus on the money aspect only. I’ve had many experiences where I go on dates and crypto becomes the whole topic of conversation.”

In turn, Perez explained that working in crypto can make dating frustrating. “Now that NFTs are generating more mainstream attention, I’ve had women at conferences start to look for crypto-rich individuals. This is frustrating because it puts you in a place of doubt. Are these women interested in me or the industry I work in,” questioned Perez.

From a woman’s perspective, adding crypto to their online dating profile can also result in challenges. Jessica Salama, community lead at GoodDollar Foundation — a non-profit initiative focused on financial education in digital assets — told Cointelegraph that while she thinks adding crypto to her profile has increased her desirability, it hasn’t necessarily been for the right reasons:

“Yes, I got more matches, but then came the ‘mansplainers.’ Working in Web3 — which still very much feels like a man’s world — has no shortages of challenges. Dodging mansplainers in and out of work and on Tinder is exhausting.”

According to Salama, “mansplainers” are patronizing men who assume that women don’t understand the basics of the blockchain industry. Unfortunately, the crypto space is still largely male-dominated and can, therefore, be frustrating for some women. On the upside, Salama is aware of the fact that she is part of a transformative industry, which can also be beneficial in terms of finding romance. “I met a great guy at a friend’s dinner who is a crypto day trader and took a genuine interest and respect in my work and passion for Web3. We spent the whole night talking. I can’t say it was love since the relationship slowly fizzled out (we forked?) but he gave me that extra push to speak up for and own what I do and love,” explained Salama.

Crypto and dating aside, eToro’s study also found that 8% of respondents would be interested in receiving a nonfungible token (NFT) as a Valentine’s Day gift this year. According to Cox, this statistic wasn’t much of a surprise given the rise of the NFT market. Yet, Cox noted that this finding was interesting since it demonstrates that Millennials and Gen Z’s value identity-themed products. “The younger generation wants to own something in real life or in the Metaverse and that shows who they are — NFTs represent this.”

As a result, a number of identity-themed Valentine’s Day NFTs are being offered this year. For example, jewelry designer MYKA has created a limited edition NFT collection consisting of digital drawings on three of their best selling jewelry pieces.

Ronnie Elgavish, vice president of global marketing at MYKA, told Cointelegraph that he believes more couples will give NFTs this Valentine’s Day due to the rise of the Metaverse and desire for a digital identity.

Ivan Sokolov, founder of Mintmade — a platform that offers programmable templates for NFTs — agrees with Elgavish. He told Cointelegraph that he thinks more couples will give tokenized Valentine’s Day cards this year.

Sokolov said that Mintmade allows users to mint a pair of custom NFTs with their and their partner’s names on them. “These NFTs are user generated, meaning it is created by the buyer. The buyer simply enters two names on the platform and can mint the NFT with these names on it,” explained Sokolov.

In addition to NFT Valentine’s Day gifts, eToro’s study found that nearly 20% of singles would be more interested in dating someone if they used an NFT as a profile picture on a social platform or dating site. “So, if your gift of an NFT doesn’t pan out, you can always use it to find a new date for March,” joked Cox.

Crypto may be sexy, but safety concerns remain

Although eToro’s findings suggest that crypto terminology and features may make online dating profiles more attractive, safety is a major factor that must also be considered when publicly mentioning cryptocurrency. Keeping a user’s crypto safe has become a main concern as the industry goes mainstream.

To put this in perspective, a recent report from blockchain analysis firm Chainalysis found that the intersection between cryptocurrency and crime grew to become a $14 billion industry in 2021. Justin Maile, manager of investigations at Chainalysis, told Cointelegraph that it’s best not to flaunt that you own crypto — especially investing or any holdings — on your dating profile to avoid making yourself a target. Maile added that scams are not confined to dating apps. “Meta (Facebook), Instagram, LinkedIn, Quora, Discord, WeChat and others are all platforms scammers use to find their victims,” he said.

Moreover, Cox remarked that eToro’s findings demonstrate that adding the term “crypto” to a dating profile helps hone in on a user’s identity, but that online daters must be wise and prudent about what they reveal. “There are good and bad actors everywhere, so individuals must be careful whether or not ‘crypto’ is mentioned in their profiles.”