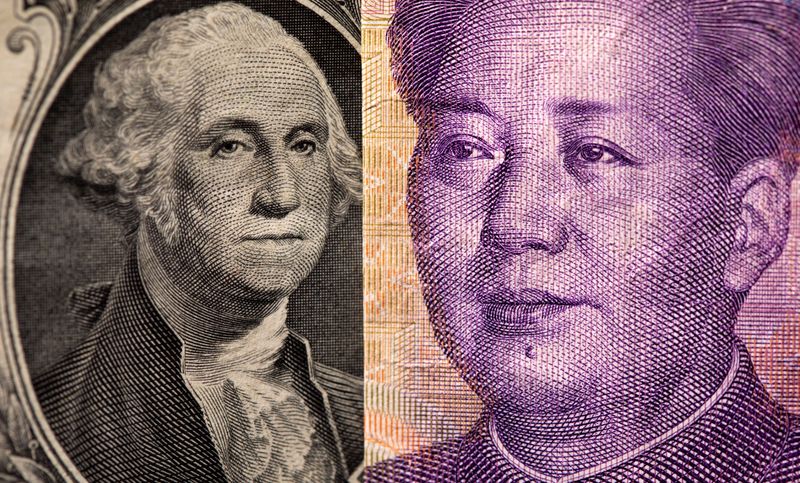 © Reuters. FILE PHOTO: U.S. one dollar and Chinese Yuan are seen in this illustration taken May 7, 2021. REUTERS/Dado Ruvic/Illustration

TOKYO (Reuters) – The wallowed near an almost one-month low on Tuesday while the safe-haven dollar and yen stood tall as investors sought shelter from a potential China Evergrande default.

The yuan stood at 6.4805 per dollar after weakening as far as 6.4879 on Monday for the first time since Aug. 23. Mainland markets are shut for holidays until Wednesday.

“It feels like the market was waiting on something from the Chinese authorities over the weekend to calm the markets and ringfence the contagion worries from a looming Evergrande default, and that didn’t come,” Chris Weston, head of research at brokerage Pepperstone in Melbourne, wrote in a client note.

Analysts at Wells Fargo (NYSE:) expect the dollar to reach 6.60 per yuan in the next month for the first time since November.

The U.S. currency had already been rising on expectations the Federal Reserve will signal a start to stimulus tapering at a two-day policy meeting that ends Wednesday.

The dollar rose 0.18% to 109.58 yen, trimming some of its overnight losses, but with the pair still meandering near the middle of the trading range of the past 2-1/2 months.

The Bank of Japan decides policy on Wednesday, with no change expected to its massive stimulus programme.

The , which measures the currency against six major peers, was little changed at 93.2241 after rising overnight to 93.455 for the first time since Aug. 23.

Market sentiment has been rattled by potential contagion from Evergrande, which is trying to raise funds to pay a host of lenders, suppliers and investors. A deadline for an $83.5 million interest payment on one of its bonds is due on Thursday, and the company has $305 billion in liabilities.

On Monday, Chinese regulators warned that the company’s insolvency could fuel broader risks in the country’s financial system if not stabilised.

Moves in Hong Kong’s could dictate the direction for the Australian dollar and other commodity-linked currencies in the near term, Pepperstone’s Weston said.

New Zealand’s dropped 0.3% to $0.7011, approaching Monday’s low of $0.7006, the weakest level this month. A 50 basis point hike to the RBNZ’s policy rate looks unlikely after the text of a speech from Assistant Governor Christian Hawkesby hinted that the central bank would move in 25 basis point increments.

Sterling was little changed at $1.3662 after sliding to a nearly one-month low of $1.3640 overnight. The Bank of England announces a policy decision on Thursday.

The regained some footing having hit a one-month low of C$1.2896 against its U.S. counterpart overnight heading into national election that could heighten political uncertainty in Canada. The dollar slipped 0.15% to C$1.2805 in Asia.

Cryptocurrencies were also hurt by the turn in risk sentiment, with bitcoin down more than 3% to around $41,700 on Tuesday after earlier touching $40,192.90 for the first time since Aug. 6.