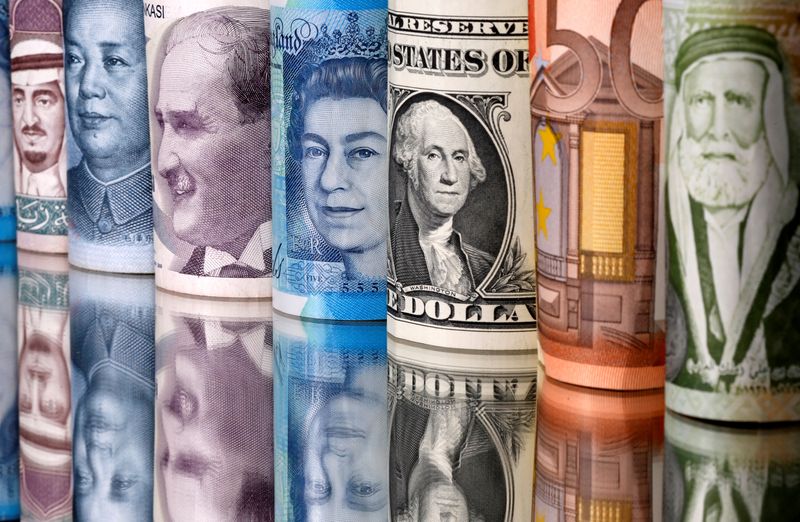 LONDON (Reuters) – The dollar was on track for its best week in a month against major rivals on Friday, as the world’s reserve currency held its ground amid a selloff of riskier assets across markets.

Investor sentiment has soured in recent days due to weaker economic data, rampant inflation and concerns over the pace of U.S. Federal Reserve policy tightening.

Stock markets in Europe opened lower in morning trading on Friday, following the trend set in Asia and on Wall Street overnight.

The – which tracks the greenback against six major peers – edged 0.1% lower on the day to 95.655 but was on course for a 0.5% weekly gain, its best performance since mid-December.

Currencies seen as riskier bets including the Australian and New Zealand dollars lost ground, while those seen as safe havens such as the Japanese yen and Swiss franc strengthened.

“The strength of the U.S. dollar today certainly looks more like the pattern you would expect in a typical period of risk-off,” currency analysts at MUFG said in a note.

“It was inevitable that if equity markets continued to decline, this more normal G10 FX pattern would emerge.”

In cryptocurrencies, was also dragged lower, falling as much as 6% to $38,250 – its lowest since August.

Poor retail sales in Britain added to a recent flow of weaker economic data. Sales slumped 3.7% in December as consumers did much of their Christmas shopping earlier and many stayed home due to the Omicron coronavirus variant.

The dollar eased on Friday as U.S. Treasury yields slipped back after a recent sharp rise that was fuelled by expectations that the Federal Reserve will tighten monetary policy at a faster pace than anticipated.

Markets are pricing as many as four rate hikes this year, starting from March and expect the Fed to start trimming its $8 trillion-plus balance sheet within months. The U.S. central bank meets next week to determine the timeline for tightening policy.

While the prospect of multiple rate rises should support the dollar, the index remains flat on the year.

“You would think higher interest rates would lead to a stronger dollar. But if you are told rates will go up soon and balance sheets shrink from July, why would you buy now. Just wait and then go into the higher rate structure,” said Mike Kelly, global head of multi-asset at PineBridge Investments.