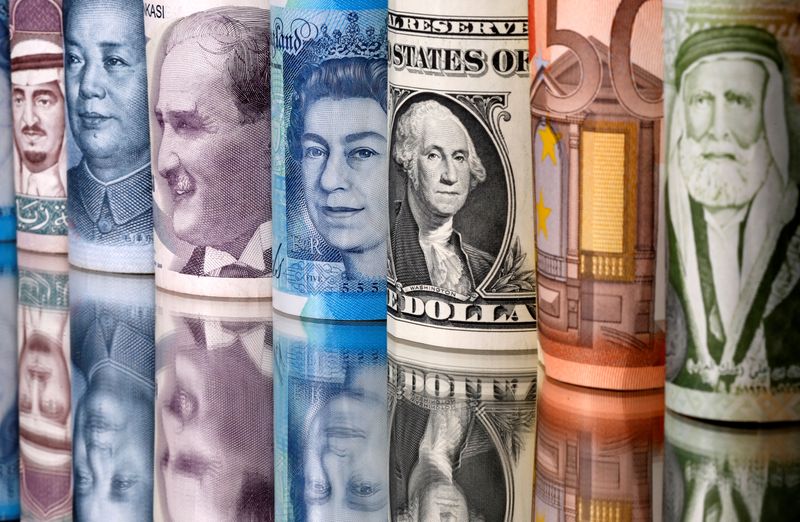 LONDON (Reuters) – The dollar held near a weekly high on Wednesday after a surge in U.S. yields resulted in sharp gains this week against the euro amid growing bets the Federal Reserve will raise interest rate.

Sterling was flat against the dollar after data showed British inflation rose 5.4% in December, to its highest level in 30 years, raising rate hike expectations.

“The strength of the labour market will give the Bank of England the confidence to continue to remove support for the economy as it looks to get a better handle on inflation,” he said.

The dollar has been boosted by U.S. Treasury yields rising further ahead of next week’s Federal Reserve policy meeting.

Ten-year Treasury yields inched up on Wednesday to touch a new two-year high of 1.9%. [US/]

“It is not a question of if, but how quickly and strongly interest rates will be raised,” he said.

“At the same time, the impression is growing that the ECB (European Central Bank) continues to take its time to get a grip on inflation in the euro zone. This is another argument currently on the market that is helping the U.S. dollar to regain its strength,” he said.

The euro was flat, back on its 50-day moving average at $1.1333 after in the previous day it had its sharpest daily drop in a month.

The pound traded at $1.3593, at a distance from the almost 11-week high touched last week. Talks of a leadership challenge to Prime Minister Boris Johnson kept the pound on check.

The overall result was that the , which measures the greenback against six major peers, was 0.04% lower at 95.670.