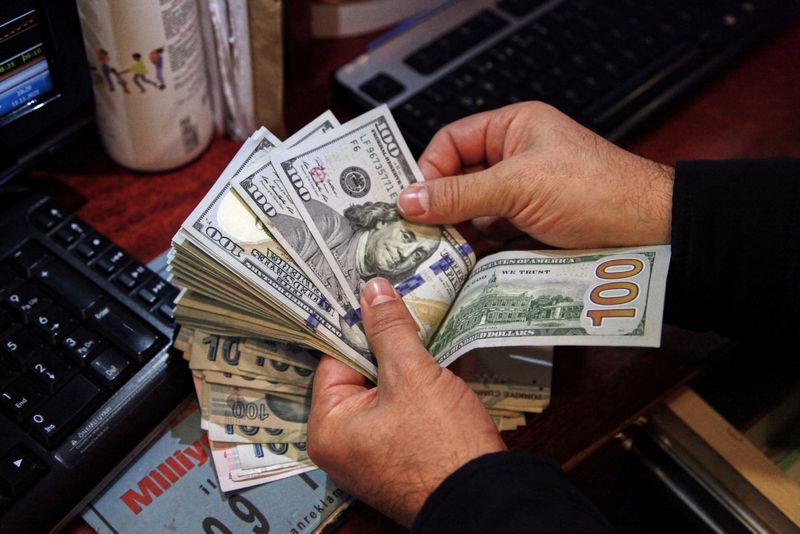 LONDON (Reuters) -The U.S. dollar stayed near one-week highs on Tuesday versus a basket of major currencies, as data showing factory gate inflation at 11-year highs confirmed market expectations of a faster taper pace at this week’s Federal Reserve meeting.

Markets were already pricing the Fed to accelerate stimulus tapering, allowing it to wrap up bond-buying around March and proceed with rate hikes.

Senior Mizuho economist Colin Asher said traders had been resuscitating dollar long positions that were unwound when the discovery of Omicron forced a cutback in rate hike bets.

“For a few days after Omicron struck, the worst performers were the commodity and global growth focused currencies. Now that trade has reversed to some extent. The dollar should remain firm until markets are convinced U.S. inflation has peaked,” Asher said.

“We have a decent long dollar position based on what we expect the Fed to do,” said Charles Diebel, head of fixed income at Mediolanum International Funds.

The Fed’s two-day meeting starting later on Tuesday headlines a string of policy decisions this week from the European Central Bank, Bank of England, the Swiss National Bank, the Bank of Japan and others.

But while money markets price good odds of a Fed rate hike by June, no moves are expected any time soon from the ECB, BOJ or SNB, while the Omicron threat could force the BoE to postpone a rate hike.

There is a high bar for the Fed to surprise hawkishly, but “they are still streets ahead of the ECB”, analysts at Westpac wrote, telling clients dollar index pullbacks into the mid-95 level were a “buy”.

The euro firmed 0.2% to $1.1309 after touching a one-week low of $1.12605 overnight. Germany’s Ifo institute on Tuesday predicted the German economy to shrink by 0.5% quarter-on-quarter in the final three months of this year and to stagnate in the first three months of next year.

The dollar was little changed at 113.520 yen, though sterling rose 0.3% after data showed employers hired a record number of staff in November.

“But for Omicron there is no doubt they would have been hiking, with Omicron it’s 50:50,” he added.

Also on the Omicron front, further COVID-related curbs in Norway pushed the crown 0.5% lower against the euro to a one-week low

inched off Dec. 4 lows hit on Monday, but remains some 30% below record highs reached in early November.