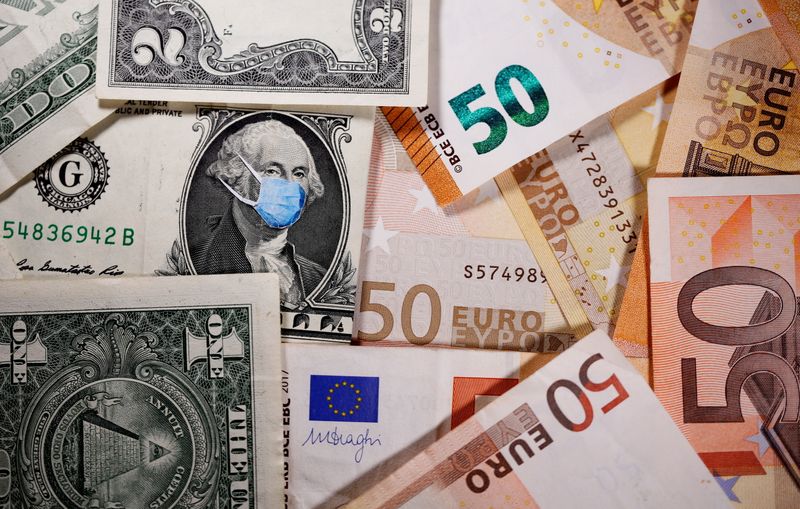 © Reuters. FILE PHOTO: George Washington is seen with printed medical masks on the one Dollar near Euro banknotes in this illustration taken, March 31, 2020. REUTERS/Dado Ruvic/Illustration

NEW YORK (Reuters) – The dollar rose on Friday as investors sought safe havens after Austria said it would be the first country in Western Europe to reimpose a full lockdown amid surging COVID-19 infections and Germany said it could follow suit, sending the euro lower.

The euro, meanwhile, which has been on its back foot all week, hit a 16-month low amid the COVID surge in Europe and as expectations have grown that interest rates will be hiked faster elsewhere, particularly in the United States.

Federal Reserve Governor Christopher Waller said the U.S. central bank should speed up the pace of tapering its bond purchases to give more leeway to raise interest rates from their near-zero level sooner than it currently expects if high inflation and the strength of job gains persists.

At a separate event, Fed Vice Chair Richard Clarida said it “may very well be appropriate” to discuss speeding up the Fed’s asset purchase wind-down when it next meets, on Dec. 14-15.

“The greenback right now is certainly benefiting from signs of a strengthening U.S. economy and from safe-haven flows due to renewed worries about the virus,” said Joe Manimbo, senior market analyst at Western Union (NYSE:) Business Solutions.

On top of a lockdown, Austria said it will require all its citizens to be vaccinated against COVID-19 from Feb. 1, while Germany’s health minister cautioned lockdown restrictions could return there.

“One thing is certain, if the whole of Europe had to go under lockdown once more, and depending on how long that would last, we would need to rethink our growth scenarios,” said Stephane Ekolo, global equity strategist at brokerage Tradition.

Commodity-linked currencies, such as the Australian, New Zealand and Canadian dollars, often seen as risky, all declined.

European Central Bank President Christine Lagarde doubled down on her cautious position on Friday, saying the ECB should not tighten policy as that could undermine recovery.

The Japanese yen, also considered a safe-haven currency, strengthened following Austria’s lockdown announcement, and was up 0.22% versus the dollar at 113.99 yen.

In cryptocurrencies, bitcoin was below $60,000 and set for its worst week in six months, last trading around $58,000.