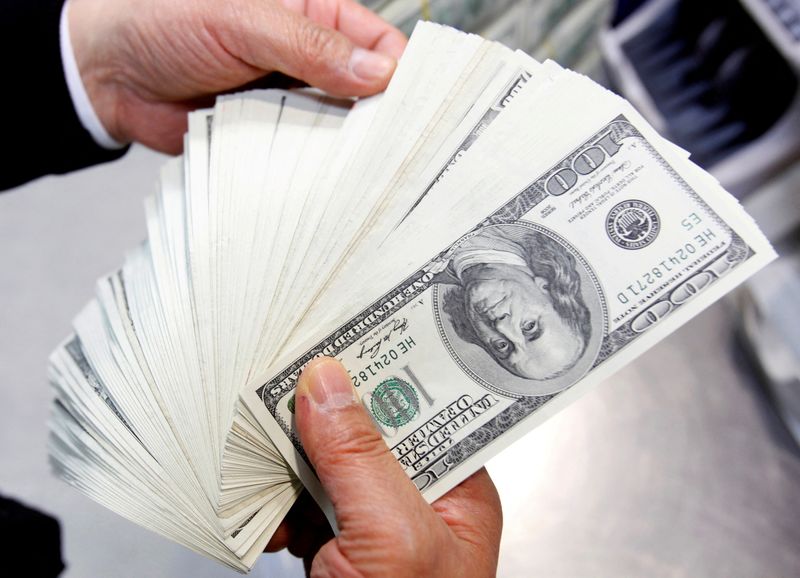 © Reuters. FILE PHOTO: An employee of the Korea Exchange Bank counts one hundred U.S. dollar notes during a photo opportunity at the bank’s headquarters in Seoul April 28, 2010. REUTERS/Jo Yong-Hak

LONDON (Reuters) – The U.S. dollar lurched lower on Monday, stepping back from a 1-1/2 year high tested on Friday, as hawkish comments over the weekend by a Federal Reserve official sent the U.S. yield curve to its flattest levels in three months.

While the Fed has clearly telegraphed a March interest rate hike after its meeting last week, some investors expect policymakers are preparing the markets for a faster pace of rate increases this year to check inflationary pressures.

A quicker pace of rate hikes is also seen as dampening future growth expectations, a scenario that is playing out in the bond markets where spreads between two and ten-year U.S. Treasury yields fell below 59 bps for the first time since early November in a phenomenon known as “bear-flattening”. [US/]

Though markets are unsure on the impact of the expected Fed’s rate hike trajectory on growth and inflation, some investors took the latest comments from Fed’s Bostic as an opportunity to take profits on the dollar’s rally in recent days.

Market expectations of as many as five rate hikes this year “reflects the growing belief that the Fed is behind the curve in fighting upside inflation risks and will need to deliver more front-loaded tightening,” Mizuho strategists said in a note.

Versus a basket of its rivals, the greenback slid 0.2% to 97.02 after rising to a mid-2020 high at 97.44 on Friday. The dollar’s 1.6% jump last week was the biggest weekly rise since mid 2021. Long dollar positions remained near their highest levels this year.

The Australian dollar was among the early gainers versus the struggling greenback with the up more than 0.5% at $0.7043 before a central bank policy meeting on Tuesday.

The Bank of England also holds its meeting on Thursday, with a Reuters poll of economists predicting a second rate hike in less than two months, as the BOE reverses more pandemic stimulus, after inflation jumped to its highest in nearly 30 years.

The European Central Bank also has a policy meeting on Thursday. While no policy change is expected, analysts are starting to warn that approaching rate hikes from the Fed will shrink the ECB’s window for action.

In cryptocurrencies, bitcoin was holding above $37,000 after a quiet weekend for the digital asset.