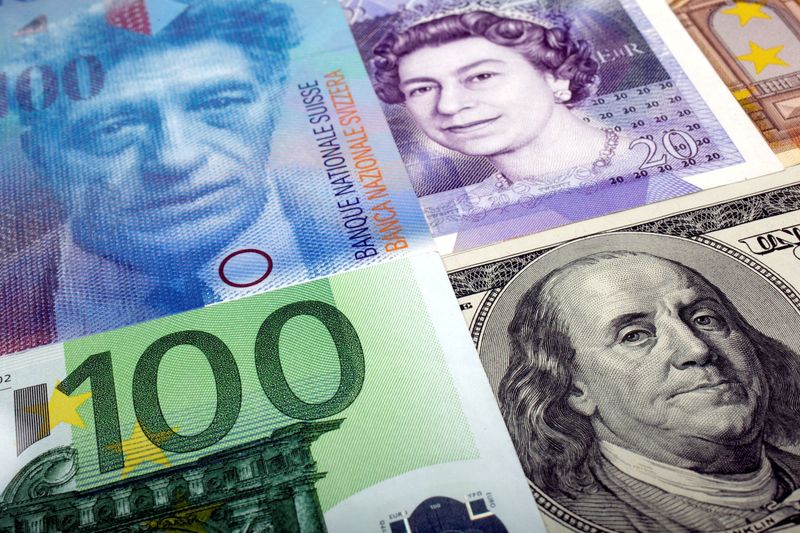 LONDON (Reuters) – The dollar edged lower on Monday as traders took the view that Federal Reserve tightening moves were largely priced in, while the euro eased from Friday’s two-month high.

An unexpected cut to key lending rates in China highlighted it as the outlier, with other major central banks in talks to raise rates. China’s move only briefly weighed on the yuan.

The , which declined sharply last week until Friday’s leap, edged down 0.1% at 95.076 at 0900 GMT. The cash Treasury market was closed for a holiday on Monday.

“With 3.7 Fed rate hikes priced in for 2022 and 2.3 for 2023, market participants seem to be inferring that the risks to policy pricing are now more balanced,” Goldman Sachs (NYSE:) told clients.

The euro rose 0.1% versus the dollar at $1.1432, with no major economic data on the calendar this week, investors will focus on speeches from President Christine Lagarde and other ECB members, ING analysts said.

European Central Bank President Christine Lagarde said on Friday, the bank is ready to take any measures necessary to get inflation down to its 2% target. Inflation rose to 5% last month, the highest on record for the 19-country currency bloc.

ECB board member Isabel Schnabel said in remarks published on Friday that raising interest rates in the euro zone would not push down soaring energy prices.

Elsewhere, momentum for tightening is rising. Even the ultra-accommodative Bank of Japan is debating how soon to begin telegraphing hike plans.

The outlier is China, where a slew of economic data confirmed the deadening effect of coronavirus restrictions on consumer spending, prompting Beijing to ease monetary policy.

The yuan initially faded slightly as government bonds rallied on the rate cut, before firming at 6.3475 per dollar. [CNY/]

UK inflation data on Wednesday could help extend a month-long rally in sterling. It was flat at $1.3679 versus the dollar, after climbing last week to its highest since late October.