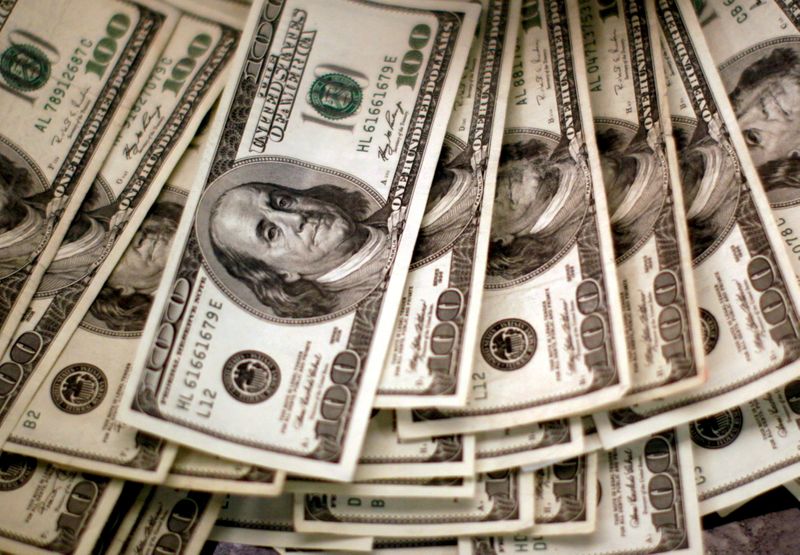 NEW YORK (Reuters) -The dollar eased versus its main rivals on Monday, after posting its biggest daily rise in more than four months in the previous session, as traders position themselves ahead of this week’s highly anticipated U.S. Federal Reserve policy meeting.

Monetary policy in the United States, Australia and Britain is in focus, with the Fed widely expected to announce a tapering of stimulus, a factor that has fueled the greenback’s rise in recent weeks.

“It ran up so much the last couple of days, I think it’s just a little bit of pre-positioning ahead of FOMC just in case they remain relatively dovish,” Boris Schlossberg, managing director of FX at BK Asset Management, said of the dollar’s pullback.

On Friday, the greenback hit its highest level since Oct. 13, rising 0.8% in its biggest single-day move since mid-June, on the back of a 4.4% jump in the government’s index of core personal consumption expenditures – the Fed’s preferred inflation measure.

“I still think there’s quite a strong chance that they’ll try to downplay inflation and still stick to the transitory message as much as possible because I don’t think they really want to create truly tightening conditions just yet,” Schlossberg said of the Fed’s policy announcement, due on Wednesday.

Quickening inflation data has prompted some investment banks such as Goldman Sachs (NYSE:) to advance their expectations of a rate hike by the Fed as early as July 2022, compared with the third quarter of 2023 previously.

“You had a move on Friday based on the PCE and you’ve got a little bit of a pullback right here,” Joseph Trevisani, senior analyst at FXStreet.com said. “Nobody is quite sure of what the Fed is going to do.”

Money markets assign a 50% probability of a 25 basis point rate hike by the Fed by next June, compared with 15% a month earlier, CME futures data shows.

Hedge fund manager Stephen Jen of Eurizon SLJ Capital in a note to clients said FX markets seem too hawkish on the ECB and too dovish on the Fed.

“With a large overhang of long euro positions among the real money community, I believe the euro will remain vulnerable in the months and quarters ahead against the dollar,” he said.

The dollar slid 0.01% to $0.7518, having fallen off its nearly four-month high of $0.75555 reached last week, ahead of the Reserve Bank of Australia’s policy decision on Tuesday.

The British pound fell to its lowest in more than two weeks versus the dollar, pressured by uncertainty over the Bank of England’s policy stance and an escalating post-Brexit spat with France over fishing rights.

Most expect the Bank of England will raise rates by 15 basis points to 0.25% on Thursday, although a split vote is likely and some think the bank may hold fire, contenting itself with a hawkish signal.