The EU’s trade chief has defended his role in drawing up vaccine export restrictions that forced Brussels into an embarrassing U-turn over measures applying to Northern Ireland.

Valdis Dombrovskis, executive vice-president of the European Commission, said a draft EU text that included measures to impose checks on vaccines entering Northern Ireland from the EU — creating a de facto hard border on the island of Ireland — was drawn up with all relevant commission input.

Brussels has been under pressure after the commission was forced into dropping the “safeguard” for Northern Ireland on Friday night after uproar in Dublin, Belfast and London, which were not consulted on the measure.

This would have triggered an emergency clause in the Brexit withdrawal treaty and was part of a wider regulation allowing EU member states to restrict drugmakers’ ability to export vaccines out of the bloc. Officials told the Financial Times the draft text was circulated to the commission’s college 30 minutes before it was due to be adopted on Friday.

With questions being asked about who was responsible for the error, Eric Mamer, commission spokesman, on Monday said ultimate responsibility for the regulation lay with Mr Dombrovskis because he is in charge of trade. 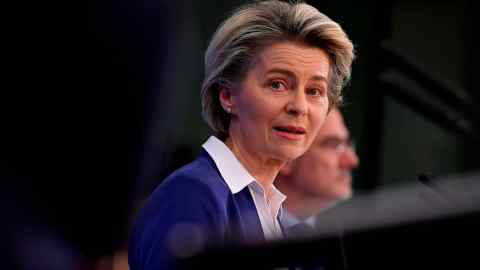 “This regulation falls under the responsibility of Mr Dombrovskis and his cabinet and of course the services of the commission which respond to him,” said Mr Mamer.

In response, Mr Dombrovskis said EU trade officials acted “at the request of — and with inputs from — relevant cabinets and services at the commission to address those public health considerations”.

“From a trade perspective, there were concerns about unintended consequences of using such a mechanism but there were overriding considerations of public health. We have done our best to make this system as temporary and targeted as possible, and we wish to reassure our trade partners that we will do our upmost to ensure supplies are not disrupted,” the Latvian commissioner said.

The botched introduction of vaccine controls has sparked a private blame game at the highest echelons of the commission over how the Northern Ireland safeguard was approved without senior officials such as Brexit chief Michel Barnier being notified.

Ursula von der Leyen, commission president, has also been under pressure to explain the U-turn. But the German commission president has eschewed requests to hold a public debate with MEPs about what happened. Instead, she will hold closed-door meetings with the European Parliament’s centre-right, centre-left, liberal and green groups on Tuesday.

Europe’s top health official has also weighed in to defend the bloc’s wider vaccine strategy, which has come under fire for shortages and delays. 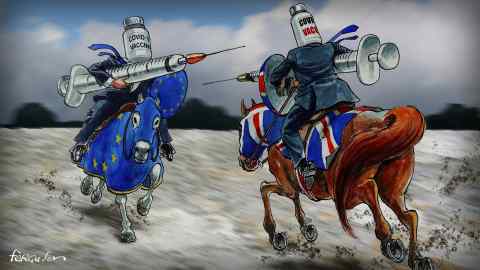 Sandra Gallina, EU director-general for health policy, on Monday told MEPs that Europe was in the “top league” of Covid-19 immunisation worldwide and denied that its rollout was hobbled by delays signing contracts with companies and a lack of investment in manufacturing capacity.

Ms Gallina said the EU had vaccinated more than 12m people and that unfavourable comparisons with countries such as Israel, the world leader in Covid-19 inoculation, were not helpful. “We have already joined the bigger league of countries. When you look at the top vaccinating countries, all EU member states are in the top league,” she said.

The vaccines chief also rejected suggestions that the EU was suffering the consequences of having ordered some leading vaccines months later than the UK, where the rollout has surged far ahead of Europe’s member states.

Ms Gallina said the length of time taken to negotiate the portfolio of almost 2.3bn doses of six vaccines was mainly because of haggling with companies over who would be responsible for problems with the vaccines. “Doing a contract with that speed is not necessarily so easy. Liability and indemnification — these were really very important for us.”