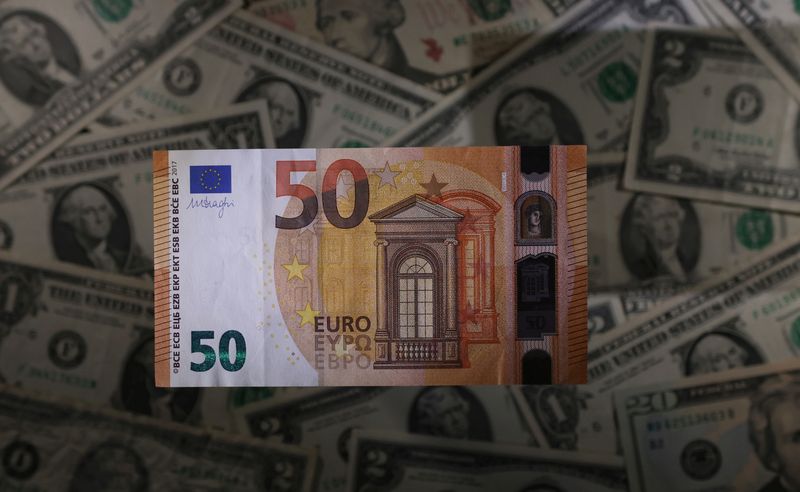 LONDON (Reuters) – The euro weakened for a second consecutive day on Tuesday after European Central Bank President Christine Lagarde said there is no need for big monetary policy tightening in the euro zone.

Bond yields surged and the euro notched up its best weekly performance since March 2020 last week after the ECB opened the door to an interest rate rise later in 2022 and said a March 10 meeting would be key in deciding how quickly the central bank would wind down its long-running bond-buying scheme.

The ECB’s hawkish twist took markets by surprise and sent yields on peripheral debt, particularly Italy, higher on Monday as investors worried about the impact of faster-than-expected monetary tightening on the bonds of the most indebted countries. [GVD/EUR]

But on Monday, Lagarde struck a more cautious tone, saying high inflation is unlikely to get entrenched, which pushed the single currency lower.

In early trading on Tuesday, the euro was down 0.3%, struggling to hold its head above the $1.14 levels.

“After all, investors are well aware that, once the ECB ‘shock’ has been absorbed, policy rates are set to climb much more in the US than in the eurozone over the coming months,” Unicredit (MI:) strategists said in a daily note.

While money markets were pricing in as much as 134 bps in cumulative rate hikes from the U.S. Federal Reserve over the remainder of 2022, analysts were expecting 50 bps in hikes from the ECB over that period.

Still, the short-term outlook has tilted in favour of the single currency, with the widely watched bond yield spread between U.S. and German 10-year debt narrowing in late January to around 170 bps from an April high of 194 bps.

On Monday, bitcoin and the Australian dollar had posted gains as equity markets rallied in Europe, but the latter was a bit softer on Tuesday as a cautious mood prevailed in Asia. The was broadly flat at $0.7127. AUD/

punched through its 50-day average to top $44,000 for the first time in nearly a month on Monday and held there in Asia for a gain of more than 17% in four sessions.