European equities dipped on Monday after Joe Biden and Vladimir Putin accepted “the principle” of a summit to prevent Moscow launching a full invasion of Ukraine, but both sides played down its likelihood.

Futures markets had tipped the Stoxx Europe 600 index to rise as much as 1 per cent in morning dealings. The share gauge added 0.5 per cent at the open, before falling back to a 0.4 per cent loss. US financial markets were closed for a holiday.

Investors have become increasingly cautious about how to respond to news flow around Russia’s intentions over Ukraine, with bad news causing sharp equity market sell-offs while relief rallies have been moderate and short lived.

The FTSE All World share index has fallen for five of the past eight sessions and has lost 1.9 per cent so far this month. Meanwhile, the price of spot gold, which dipped 0.1 per cent to $1,896 a troy ounce on Monday, has gained about 5 per cent since the end of January.

“The small relief rally we saw this morning did not make a bullish market,” said Florian Ielpo, head of macro at Swiss bank Lombard Odier.

“Since last week, every market top is getting lower and lower and institutional money is getting cold feet,” he added. “Every bit of news we are getting [about Ukraine] is more confusing.”

On Sunday, French president Emmanuel Macron spoke to Russia’s leader in two lengthy phone calls, in what a French official described as “part of the last possible and necessary efforts to avoid a major conflict”.

A Biden administration official told the Financial Times the format and timing of a possible Biden-Putin summit remained “to be determined” and it was “all completely notional”.

The Kremlin on Monday then said there were “no concrete plans” for such a meeting, but did not rule out the option.

Moscow has massed as many as 190,000 troops on Ukraine’s borders despite previously pledging they would return to Russia. Belarus, meanwhile, said over the weekend that 30,000 Russian troops participating in joint drills would stay indefinitely.

Currency and government bond markets were pricing in some cautious optimism about a diplomatic resolution to the Ukraine stand-off on Monday.

The dollar index, which measures the greenback against six major currencies and tends to rise alongside geopolitical tensions, fell 0.2 per cent.

The euro, which has been under pressure from concerns about the affect on European economies of possible sanctions against Russia, added 0.3 per cent against the dollar to purchase $1.136.

“Still, the situation in the Donbas region remains volatile and we suspect markets may be overpricing a “smooth” diplomatic solution too early.”

Brent crude, the international oil benchmark, pulled back from earlier gains of as much as 1.6 per cent to trade 0.3 per cent higher at $93.81 a barrel. 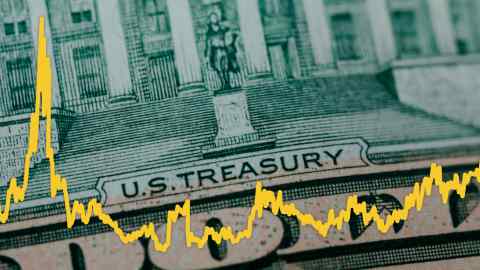 Energy is the world’s indispensable business and Energy Source is its newsletter. Every Tuesday and Thursday, direct to your inbox, Energy Source brings you essential news, forward-thinking analysis and insider intelligence. Sign up here.