Sign up to myFT Daily Digest to be the first to know about Supply chains news.

The lorry driver crisis is set to deepen next year as wages rise and labour shortages worsen, the regional head of one of the world’s largest haulage companies has warned.

Europe has been hit by a shortage of drivers, with the problem in the UK particularly acute because of Brexit, the pandemic, tax reforms and backlogs for driving tests fanning the flames of a supply chain crisis.

This has led to empty shelves at supermarkets and manufacturers shutting down production lines, with many logistics groups bracing themselves for a brutal Christmas as retailers warn more goods will be out of stock.

Gomez said there would be no easing off of the industry-wide crisis next year because of tougher EU labour laws on commercial road transport, known as the Mobility Package, that come into force in February and also apply to the UK.

“This Mobility Package will be in force from February 21 and it will produce further capacity constraints and inflation,” he said, adding that transport costs would rise “for at least the next 18 months”.

Europe has an estimated 400,000 shortage of lorry drivers, according to research group Transport Intelligence, with the workforce stretched by the pandemic-induced boom in online shopping.

But the deficit would likely deepen and wages would rise sharply because of three main rule changes, layered on top of persistently strong demand, Gomez said.

From next February, truck drivers will be subject to tougher EU labour laws designed to protect workers from harsh conditions and low pay.

The EU Mobility Package reforms were approved after three years of negotiations last year, and will require truck drivers to take breaks of four days when carrying out jobs within a country, while lorries have to return to their home country every eight weeks. 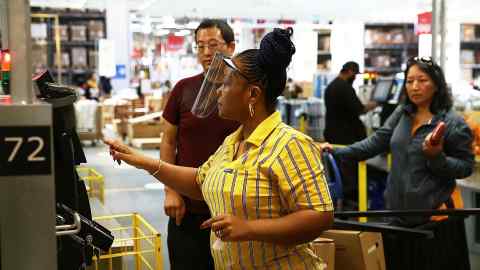 Drivers will also be eligible to receive the statutory minimum wage in every member state they drive in for most jobs between countries outside of their registered nation.

While welcoming the rule changes as positive in the long-term and noting that XPO Logistics expected to cope better with the disruptions next year, Gomez said drivers’ salaries on the continent would rise by “high single to low double-digit” percentages.

This is likely to add to transport costs, which would be another blow for retailers, wholesalers and manufacturers that have endured a year of elevated shipping and logistics costs already.

Edwin Atema, who works on trucking labour rights at the Federation of Dutch Trade Unions, said the amendments were an encouraging development but enforcement and pay rises were needed to stop poor labour conditions in the sector from further fuelling the worker shortages.

“The EU regulation is not worth the paper it’s written on because there’s no enforcement. It goes for two decades like this,” he said. “XPO says something like this, so it can go to customers to ask for more money for their own profits.”