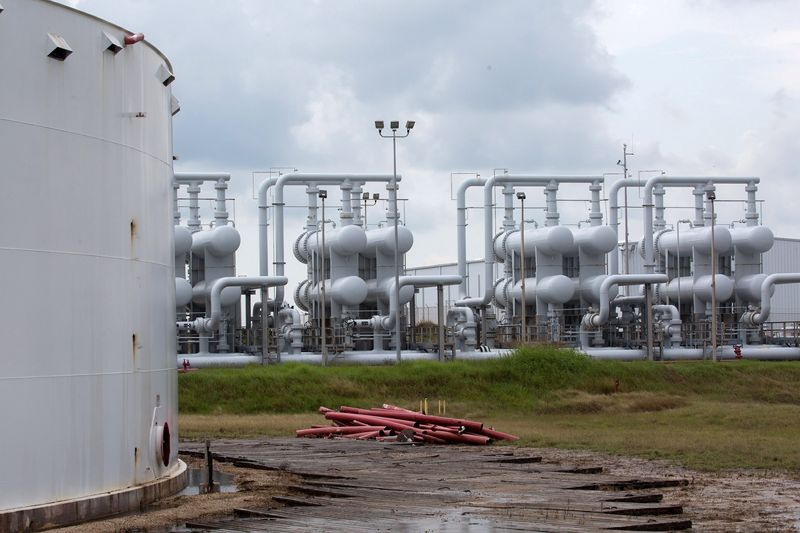 © Reuters. FILE PHOTO: An oil storage tank and crude oil pipeline equipment is seen during a tour by the Department of Energy at the Strategic Petroleum Reserve in Freeport, Texas, U.S. June 9, 2016. REUTERS/Richard Carson/File Photo

WASHINGTON (Reuters) – U.S. President Joe Biden this week called on his administration and Congress to explore ways to boost American energy production and reduce OPEC+’s control over energy prices after what he called the cartel’s “shortsighted” production cut.

Rising oil and fuel prices are a big risk to Biden’s fellow Democrats as they seek to keep control of Congress in the Nov. 8 midterm elections, and help drive soaring consumer inflation threatening the economy.

Here are some of the policy options the United States could use as it seeks to reduce energy prices and counter the Saudi Arabia-led OPEC+ producer group:

The administration could decide to release more oil from the Strategic Petroleum Reserve (SPR), an emergency stockpile created after the 1970s Arab oil embargoes that Biden has already leaned on heavily to keep fuel prices in check.

Earlier this year, the Biden administration announced a record sale from the reserve: 180 million barrels for six months beginning in May, as pump prices soared to record heights.

That sale helped ease global energy prices, and the administration has found demand for the oil to be less than expected. Last month the administration extended the duration of the sale into November as only about 155 million barrels had been sold.

Even so, the amount of oil in the reserve has fallen to the lowest since July 1984. The SPR still holds well more than the United States is required to under an agreement with allies in the International Energy Agency, but big additional sales from the stockpile could raise worries that it is getting too thin to properly address another big global supply disruption.

TAKE A CRACK AT OPEC

Biden pledged to consult Congress on additional tools to cut OPEC’s control over energy prices, a potential reference to a decades-long effort to open OPEC to antitrust lawsuits for orchestrating supply cuts.

The so-called NOPEC bill, brought up numerous times over the past 20 years but never enacted, easily passed a Senate committee in May, and several lawmakers have come out in support of such legislation since OPEC’s Wednesday decision.

Saudi Arabia is concerned the legislation could one day pass and has lobbied hard against it. NOPEC could also pressure Russia, a member of the wider OPEC+ group that agreed to cut output, and which faces sanctions after its invasion of Ukraine.

The White House has previously expressed concerns about unintended consequences of the bill, and – despite its public admonition over the Saudi-led OPEC+ cut decision – is reluctant to further fray ties with Riyadh, a longtime strategic ally in the Middle East.

Biden’s Department of Energy has repeatedly publicly castigated U.S. oil companies for exporting vast amounts of gasoline and other refined products – and raking in huge profits – at a time of painfully high consumer energy prices and thin domestic inventories.

That has made the oil industry worry the White House will try to impose a ban or limitations on U.S. energy exports, a move they say would undermine free market values and make it harder for companies to compete.

Two top industry groups this week asked the administration to explicitly rule out curbs on exports.

The Department of Energy has said the option is not currently being considered, but remains on the table.

The Biden administration has already used a handful of smaller measures to ease fuel prices, including lifting summertime restrictions on high ethanol blends of gasoline to boost volumes and easing some other regional environmental requirements to make it easier for refiners to supply the market.

Additional options include a federal gas tax holiday or gas cards that could provide rebates to consumers; possible relaxation of the Jones Act, a law requiring that domestic cargo be carried on American-made tankers using union labor, to expand seaborne deliveries; or lifting sanctions on oil-producing nations like Iran and Venezuela to help them boost output.

Each of these ideas is politically fraught, however, and may also have limited impact on prices.

Biden earlier this year proposed a three-month suspension of the federal gasoline tax, for example, to help consumers at the pumps but was turned down by lawmakers who believed it would have cost the government too much in lost revenue.

Another option: conservation. Americans are by far the world’s heaviest consumers of gasoline, thanks to big cars, long driving distances and little public transportation in many areas. But proposed fixes to this are long-term, and include things like incentives for electric vehicle purchases and more investment in buses and commuter trains.