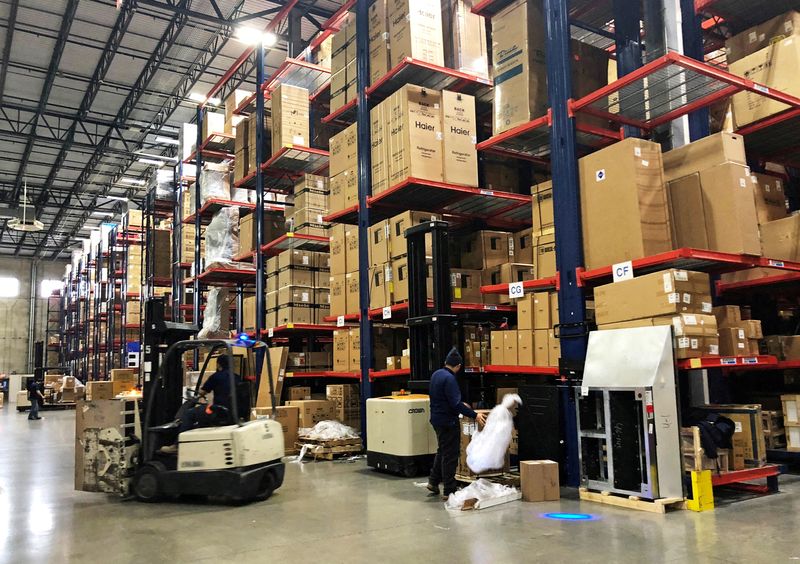 © Reuters. FILE PHOTO: Warehouse workers deal with inventory stacked up to the ceiling at an ABT Electronics Facility in Glenview, Illinois, U.S. December 4, 2018. REUTERS/Richa Naidu/File Photo

WASHINGTON (Reuters) – The U.S. economy notched its strongest growth in nearly four decades in 2021 after the government pumped trillions of dollars in COVID-19 relief, and is seen forging ahead despite headwinds from the pandemic, strained supply chains as well as inflation.

A surge in gross domestic product in the fourth quarter as businesses replenished depleted inventories to meet strong demand for goods was the final push. Last year’s robust growth reported by the Commerce Department on Thursday supports the Federal Reserve’s pivot towards raising interest rates in March.

Fed Chair Jerome Powell told reporters on Wednesday after a two-day policy meeting that “the economy no longer needs sustained high levels of monetary policy support,” and that “it will soon be appropriate to raise” rates.

“While Omicron will lead to weaker growth in the first quarter, activity is expected to rebound nicely once the latest pandemic wave abates and supply-chain glitches ease,” said Sal Guatieri, a senior economist at BMO Capital Markets in Toronto.

“The Fed will need to be ‘humble and nimble’ as it navigates underlying economic strength, worsening labor shortages, and stubbornly high inflation.”

It was the first time in 20 years that the U.S. economy grew faster than the Chinese economy.

President Joe Biden quickly took credit for the stunning performance, which he said was “no accident.”

Biden’s popularity is falling amid a stalled domestic economic agenda after Congress failed to pass his signature $1.75 trillion Build Back Better legislation.

“We are finally building an American economy for the 21st Century, and I urge Congress to continue this momentum by passing legislation to make America more competitive, bolster our supply chains, strengthen our manufacturing and innovation, invest in our families and clean energy, and lower kitchen table costs,” Biden said in a statement.

Gross domestic product increased at a 6.9% annualized rate in the fourth quarter, the government said in its advance GDP estimate. That followed a 2.3% growth pace in the third quarter.

Growth is 3.1% above its pre-pandemic level.

Economists polled by Reuters had forecast GDP growth rising at a 5.5% rate.

The momentum, however, faded by December amid an onslaught of COVID-19 infections, fueled by the Omicron variant, which contributed to undercutting spending as well as disrupting activity at factories and services businesses. But there are, signs that infections have peaked, which could lead to increased demand for services by spring.

Inventory investment increased at a $173.5 billion rate, contributing 4.90 percentage points to GDP growth, the most since the third quarter of 2020. Businesses had been drawing down inventories since the first quarter of 2021.

Spending shifted during the pandemic to goods from services, a demand boom that pressured supply chains. Excluding inventories, GDP grew at a moderate 1.9% rate.

Stocks on Wall Street were trading higher. The dollar gained versus a basket of currencies. U.S. Treasury yields fell.

Some economists viewed the modest growth in the so-called final sales as a sign that the economy was set to slow down significantly, especially if not all the inventory accumulation was planned. They also worried that rate hikes as well as reduced government aid, especially the loss of the childcare tax credit, could hurt demand.

“Fed policymakers will have to be extremely careful at threading the needle when they raise interest rates as every other Federal Reserve in history has raised interest rates too high and brought the economy crashing back down,” said Christopher Rupkey, chief economist at FWDBONDS in New York.

Growth last quarter was also lifted by a jump in consumer spending in October before retreating considerably as Omicron raged. Consumer spending, which accounts for more than two-thirds of economic activity, grew at a 3.3% rate after rising at a 2.0% pace in the third quarter.

A decrease in purchases of motor vehicles, which are scarce because of a global chip shortage, was offset by increases in spending on healthcare as well as at membership clubs, sports centers, parks, theaters and museums.

Inflation increased at a 6.9% rate, the fastest since the second quarter of 1981, way above the Fed’s 2% target. That resulted in income at the disposal of households dropping at a 5.8% rate, which also limited consumer spending.

Still, households remained cushioned by huge savings, which were at $1.34 trillion. Wages surged at an 8.9% rate before adjustment for inflation, reflecting a labor market that is experiencing an acute shortage of workers, with 10.6 million job openings at the end of November.

Though the labor market took a step back in early January as Omicron surged, it is at or near maximum employment. A separate report from the Labor Department on Thursday showed initial claims for jobless benefits dropped 30,000 to a seasonally adjusted 260,000 during the week ended Jan. 22.

There were sharp declines in claims in Illinois, Kentucky, Texas, New Jersey, New York as well as Pennsylvania.

Support to GDP growth last quarter also came from a rebound in business spending on equipment. But government spending fell at both the federal and state and local levels.

Trade made no contribution after being a drag on GDP growth for five straight quarters, while investment in homebuilding contracted for a third consecutive quarter. The sector is being constrained by expensive building materials, which has resulted in a record backlog of homes yet to be built.

Despite the economy’s struggles at the start of the year, most economists believe the run of good fortunes will prevail. Growth estimates for this year top 4%.

“This year may well be an even better year for the economy,” said Scott Hoyt, a senior economist at Moody’s (NYSE:) Analytics in West Chester, Pennsylvania. “Growth will slow and monthly job gains will lag last year’s lofty rates. Nonetheless, the economy should be near full employment and inflation near the Fed’s target by year’s end.”