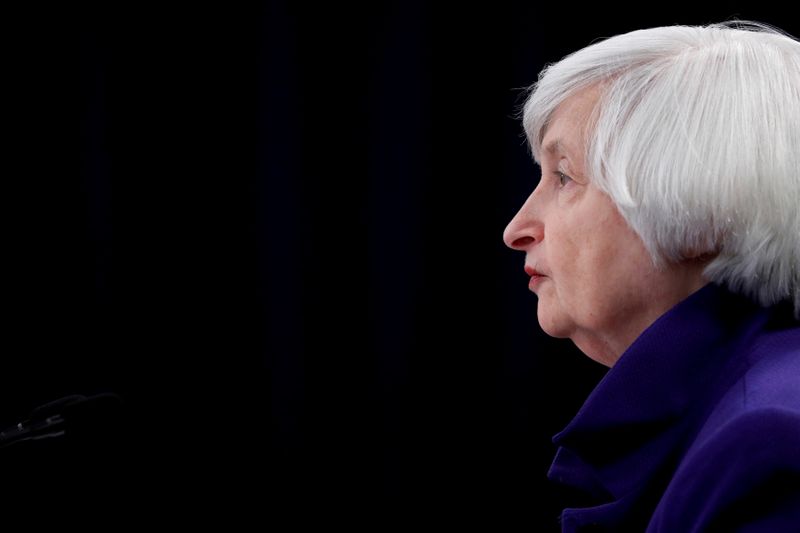 By Pete Schroeder and Chris Prentice

WASHINGTON (Reuters) – With hedge funds at the center of market drama for the second time in less than 12 months, the GameStop (NYSE:) saga is likely to expedite a regulatory review of the ever-larger role non-bank firms play in the financial markets, regulatory experts said.

Scrutiny of the non-bank financial sector was already expected to be high on newly appointed Treasury Secretary Janet Yellen’s agenda after hedge fund de-leveraging contributed towards turmoil in the U.S. treasury market in March 2020.

But the sector is likely to garner much closer attention after a retail buying frenzy in GameStop and other stocks burnt several hedge funds that had bet against the companies, and led retail brokerages to restrict trading in the affected stocks.

The incident appeared to spark market-wide volatility, as hedge funds scrambled to meet their obligations and close out bad bets, trading the highest volume of shares since 2009, according to an analysis from Goldman Sachs Group Inc (NYSE:).

It has shone a spotlight on the huge footprint of non-bank equity trading firms, particularly that of Citadel Securities, which accounts for over 20% of all U.S. equities volumes and roughly 39% of all U.S.-listed retail volume, according to its website. Its heft has raised questions over the company’s market power.

“Washington was already expected to scrutinize various non-bank financial markets, but this episode increases the urgency,” Isaac Boltansky, director of policy research at Compass Point Research & Trading wrote in a note. “Citadel Securities will certainly be part of the conversation.”

A spokeswoman for Citadel Securities did not immediately provide comment Monday evening.

In response, the Treasury’s Financial Stability Oversight Council (FSOC) began a review of the asset management sector, and in 2016 warned that leveraged hedge funds could cause instability during market stress if they became forced sellers.

The FSOC said it would continue monitoring hedge fund risks, including leverage, and address data blindspots, but months later former President Donald Trump’s administration shut down that project, according to Yellen and public records.

With a Democratic administration now in power and a new crop of regulators due to take over, regulatory advocates expect the Treasury to reprise this project.

“This is a decent moment to step back and think about what trading activities in the financial system regulators should really be concerned about from a broader systemic perspective,” said Gregg Gelzinis of Washington think tank Center for American Progress, who has advocated for FSOC to take on hedge funds.

The Managed Funds Association, which represents the sector, did not provide comment on recent industry gyrations, but has said that hedge fund investments help pension funds and other institutional investors manage risk and deliver returns.

Hedge funds won’t be the only ones in the spotlight. Open-ended funds and money market funds, which have also grown in systemic importance, are already under review internationally by the global Financial Stability Board.

“We need better oversight of the non-bank financial sector, to make sure we have rules and safeguards in place that creates a financial system that serves the economy,” said Gelzinis.

The Treasury did not respond to a request for comment, but Yellen has been a strong advocate of FSOC’s work and has previously said March’s treasury market turmoil showed that the risks FSOC had identified were “real and serious.”

During that episode, highly leveraged hedge funds dumped treasuries to meet margin calls, prompting the Federal Reserve to step in and prop up the market, according to the Bank for International Settlements. It added that September 2019 dislocations in the repurchase agreement market were a “precursor” to the March turmoil and involved similar players.

As of 2020, the aggregate net value of U.S. hedge fund assets was $2.9 trillion, but when taking leverage into account gross assets were $6.3 trillion, said FSOC. While aggregate leverage was relatively small, much of it was concentrated among a small number of players, FSOC found in 2016.

That concentrated leverage and the exposure it creates for bank counterparties “could become an area of focus,” said Boltansky.