NYSE:GE added 4.66% on Tuesday alongside a broader market rally that saw the Dow’s best day in three months.
A Bank of America analyst upgraded General Electric on some serious 2021 tailwinds.
GE Healthcare won the award for the 2020 Global Company of the Year.

NYSE:GE has continued to claw its way back to relevance in 2021 after years of bleeding through its cash reserves. On Tuesday, General Electric gained 4.66% to close the trading session at $11.24 as the broader markets rebounded after a week of uncertainty from the r/WallStreetBets standoff. With the surge on Tuesday, GE is once again trading over its 50-day moving average and is now within reach of eclipsing its 52-week high price of $13.26, which the stock has not seen since before the outbreak of the COVID-19 pandemic.

On Monday, General Electric received a nice upgrade from an analyst at Bank of America, which raised his price target for the iconic American company to $14. The analyst, Andrew Orbin, cited significant tailwinds for 2021 which include an emphasis on renewable energies, a rebound of the commercial aviation industry, as well as strong guidance for between $2.5 billion and $4.5 billion in free cash flow. The $14 price target from Orbin represents a 25% premium on the closing price from Tuesday. 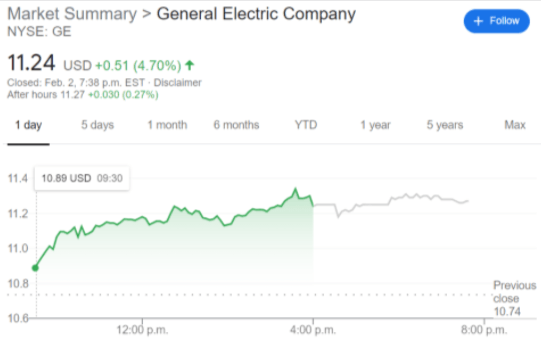 General Electric’s healthcare division received a well-deserved honour recently as it was named the 2020 Global Company of the Year. The award is specifically for GE’s global healthcare command centers that support regional med-tech solutions, particularly during the recent COVID-19 pandemic. While General Electric is not usually noted or its healthcare branch, it should be good news to shareholders that the company’s other divisions are doing well at a time where the aviation department is slumping.