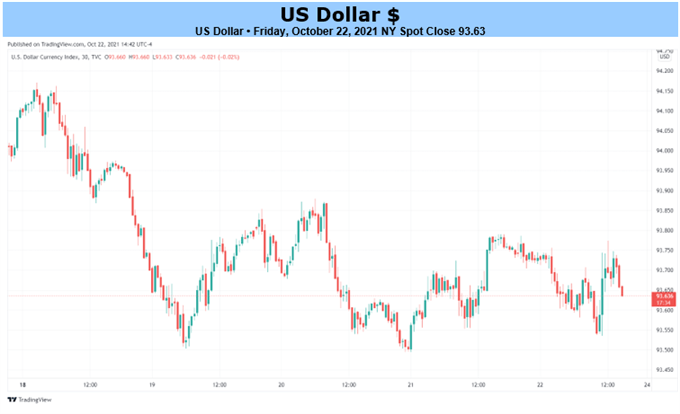 The US Dollar Index (DXY) depreciates for the second week after snapping the opening range for October, and fresh data prints coming out of the US may keep the Greenback under pressure as signs of a slowing recovery undermines speculation for an imminent shift in Federal Reserve policy.

Fundamental Forecast for US Dollar: Neutral

The DXY holds near the monthly low (93.50) as Fed Governor Randal Quarlesanticipates a slow down in economic activity, with the official acknowledgingthat “supply bottlenecks and labor shortages that have been more widespread and persistent than many expected.”

As a result, a slew of mixed data prints may produce headwinds for the Dollar as Durable Goods Orders are expected to fall 0.2% in September, while the GDP report is anticipated to show the growth rate expanding 2.5% after growing 6.7% per annum in the second quarter of 2021. 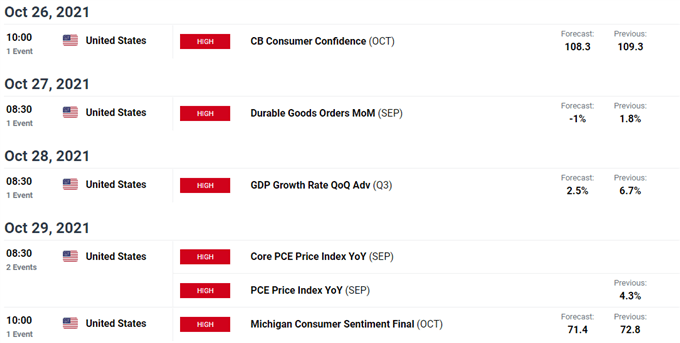 Meanwhile, the update to the Personal Consumption Expenditure (PCE) Price Index may encourage the Federal Open Market Committee (FOMC) to scale back monetary support sooner rather than later if the report shows another pick up in in the headline and core reading for inflation, and the recent weakness in the US Dollar may turn out to be a correction in the broader trend as evidence of sticky price growth puts pressure on the central bank to switch gears at the next interest rate decision on November 3.

With that said, the US Dollar may face a larger correction going into the end of the month as the US GDP report is anticipated to show a slowing recovery, but speculation for a shift in Fed policy may keep the Greenback afloat as it lifts longer-dated Treasury yields.