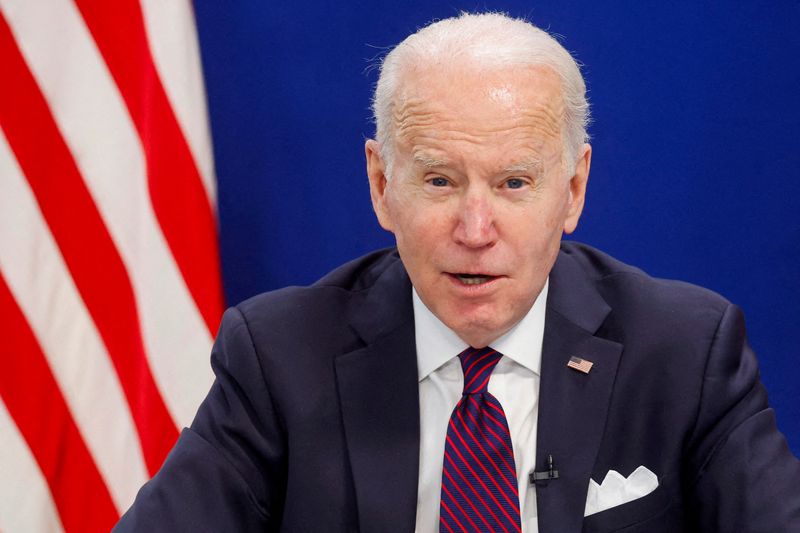 By Alexandra Alper and Karen Freifeld

WASHINGTON (Reuters) -If Russia further invades Ukraine, the Biden administration could deprive it of a vast swath of low- and high-tech U.S. and foreign-made goods, from commercial electronics and computers to semiconductors and aircraft parts, people familiar with the matter told Reuters.

President Joe Biden would achieve that by expanding the list of goods that require U.S. licenses before suppliers can ship them to Russia, and his administration would then deny those licenses, the people said.

The measures, whose details have not previously been reported, are part of a suite of export control penalties that the United States has prepared to damage Russia’s economy, targeting everything from lasers to telecoms equipment and maritime items.

They were not announced on Tuesday as part of a round of sanctions unveiled by Biden to punish Russian President Vladimir Putin for recognizing two breakaway regions of Ukraine as independent and deploying troops into the regions to “keep the peace.”

But a senior administration official said, “if Putin escalates further, we will escalate further, using both financial sanctions and export controls, which we’ve yet to unveil.”

The official added: “Export controls are really potent because we’re talking about critical technology inputs that Russia needs to diversify its economy.”

The official added that the United States is “fully prepared with a very large number of countries across the world to implement those export control measures if the invasion proceeds.”

The White House, and the Commerce Department, which oversees U.S. export controls, did not respond to requests for comment on details of the potential restrictions.

The package, which was still being fine-tuned over the weekend and could change, could come even as some White House officials have pledged to spare the Russian consumer from the brunt of the penalties.

The goal of the export control measures “is really to degrade Russia’s ability to have industrial production in a couple of key sectors,” Peter Harrell, who sits on the White House’s National Security Council, said in a speech last month. He said the administration was focused on industrial production and high-tech sectors “rather than how do we sort of target the Russian people writ-large.”

The administration has been vowing to hit Moscow with a potent cocktail of banking sanctions and export controls for weeks, in response to a massing of hundreds of thousands of Russian troops along Ukraine’s borders.

Reuters reported on Saturday that the Biden administration had also prepared a package of sanctions against Russia that includes barring U.S. financial institutions from processing transactions for major Russian banks.

By far the most sweeping measure contained in the export controls package would take a page from restrictions placed on Chinese telecom giant Huawei Technologies Co Ltd under former President Donald Trump. It would dramatically expand the scope of the so-called Foreign Direct Product Rule (FDPR), requiring firms that use U.S. tools to make technology overseas to obtain a U.S. license before shipping them to Russia.

“It’s extraordinarily novel and has the potential for being far more significant than controls just on exports of these items from the United States,” said Washington lawyer Kevin Wolf, a former Commerce Department official.

U.S. suppliers would also have to obtain licenses for certain Russia-bound items that do not currently require them, such as civil aircraft parts. Whether Europe would follow suit with similar measures remains to be seen.

Japan said on Tuesday it stood ready to join the United States and other G7 industrialised nations in slapping sanctions on Russia.

On Tuesday, Biden said the United States would impose sanctions against two large Russian financial institutions and Russian sovereign debt and against some Russian elites and their family members.

On Monday, as an initial response to Putin’s moves into eastern Ukraine, Biden vowed to end investment in and trade with the regions while British Prime Minister Boris Johnson announced initial sanctions targeting Russian banks and billionaires.

Under changes proposed in the U.S. export control package, the license applications, in turn, would face a strict “policy of denial” standard of review, meaning only in rare cases would the administration approve them.

In addition, Russian companies listed as so-called military end users for their alleged ties to the Russian military, including a handful of aircraft producers, would be added to a trade blacklist known as the entity list. That would broaden the scope of items the companies would need licenses to obtain.

Finally, Washington would expand the scope of products that would need approval from the United States when sent to Russian military end users through an even broader application of the FDPR rule, subjecting to U.S. licenses requirements all items made abroad with U.S. tools and destined for companies that support the military.

U.S. exports to Russia were under $5 billion in 2020, according to the Commerce Department, and already face many curbs. But the use of the FDPR rule dramatically expands the impact of the restrictions included in the package.