Independence from the UK would cost Scotland’s economy up to three times as much in lost trade than Brexit will, according to analysis by the London School of Economics’ Centre for Economic Performance.

The study comes amid a renewed push for independence by Scotland’s governing Scottish National party, which last month announced plans to seek to legislate for a second referendum on the issue even without UK approval for such a vote.

It will add to pressure on the SNP government, which has frequently criticised the UK government over Brexit’s economic impact, to set out a case for independence that takes into account the UK’s exit from the EU.

The LSE report calculates that impediments to trade created by Brexit will reduce Scotland’s long term real income per capita by 2.0 per cent. The study finds that independence would cut income by a further 4.5-6.7 per cent even if Scotland stayed in a “common market” with the rest of the UK (rUK) — and that rejoining the EU would do little to reduce the impact.

The Scottish government said the study did not take into account changes to policies on immigration, inward investment and other areas that it could employ after leaving the UK to “do things better” and boost the economy.

“There is no reason whatsoever that Scotland could not emulate the success of independent countries of our size which are far wealthier per head than the UK,” said Fiona Hyslop, Scotland’s economy secretary, citing Denmark and Norway.

“Through membership of the EU, independent Ireland has dramatically reduced its trade dependence on the UK, diversifying into Europe and in the process its national income per head has overtaken the UK’s,” Ms Hyslop said in a statement.

However, the LSE research highlights the implications of creating new barriers to trade with the rUK, with which the Scottish economy is tightly integrated and which accounted for about 60 per cent of its exports before Brexit — far more than the 19 per cent that went to the EU.

The prospectus published by the Scottish government ahead of the 2014 independence referendum, in which voters backed remaining in the UK by 55-45 per cent, was based on continued membership by both sides of the EU single market and customs union. 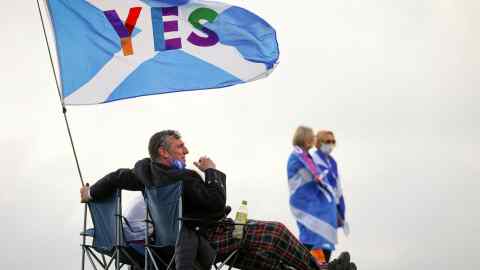 A plan commissioned by the SNP and published in 2018 said that “securing frictionless borders” with both the remaining UK and EU should be a “top strategic priority” for an independent Scotland.

But the deal agreed by the UK and EU in December means frictionless trade with both will be impossible for the foreseeable future, while the disruption and increased bureaucracy suffered by UK exporters since December 31 has highlighted the risks of creating a border between Scotland and England.

The LSE study assumed that even with a shared common market after independence, trade costs between Scotland and the rUK would increase by 15-30 per cent. EU membership would ease trade with the bloc, but lead to a harder border with the rUK and similar levels of overall long term damage to trade, it said.

“Rejoining the EU following independence would do little to mitigate [the overall trade costs] and in the short run would probably lead to greater economic losses than maintaining a common economic market with the rest of the UK,” said Thomas Sampson, an associate professor of economics at LSE.