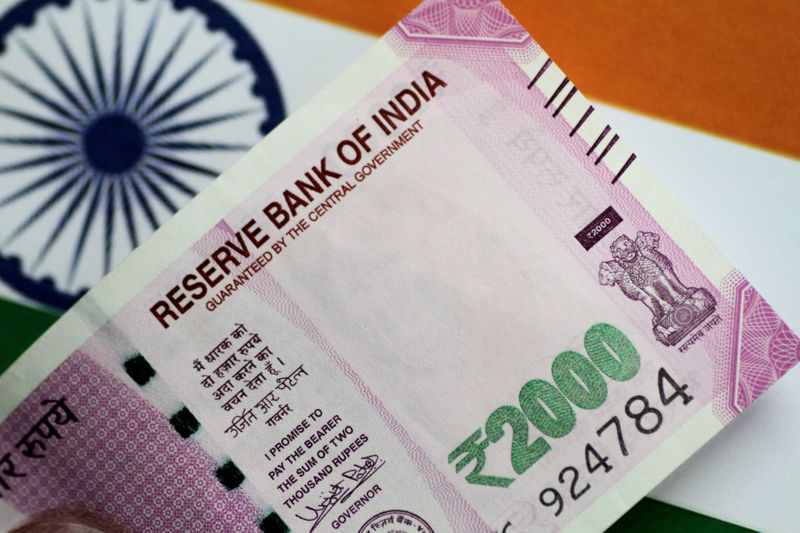 MUMBAI (Reuters) – The Indian rupee saw its worst week in seven on Friday, while the benchmark 10-year yield closed at its lowest in more than two weeks as concerns over a COVID variant spooked markets across the globe.

Shares and currencies in Asia’s emerging markets fell sharply as investors fled riskier assets after the detection of the significant mutation, which in-turn strengthened safe-haven assets such as the dollar.

The partially convertible rupee ended at 74.87 per dollar compared to its close of 74.51. It touched a low of 74.9250 earlier, its lowest since Nov. 1. On the week, the unit fell 0.9%, its biggest weekly loss since the week to Oct. 8, snapping five straight week of gains.

The benchmark 10-year bond yield ended at 6.33%, its lowest close since Nov. 9 and down 4 basis points on day.

“Buying being seen in bonds is largely on account of the new variant today. The market now expects the RBI to be dovish due to the uncertainty,” said Murthy Nagarajan, head of fixed income at Tata Asset Management.

“Some people are also toying with the idea that they may not even hike the reverse repo rate”.

The Reserve Bank of India is due to announce its monetary policy committee’s decision after a three-day meeting on Dec. 8 and a large section of the market has been expecting them to start raising the reserve repo rate to try to normalise the policy rate corridor to pre-pandemic levels.

The central bank has already started conducting variable rate reverse repo auctions of slightly longer tenors to temporarily absorb the massive liquidity surplus in the banking system but has shied away from announcing any more permanent measures so far.

Traders expect the 10-year bond yield to trade in a 6.25% to 6.40% range until the policy decision, while the rupee is expected to largely track domestic shares and dollar moves for direction. It is broadly expected to hold between 74.25 to 75 per dollar range over the next two weeks.

Moves in global prices will also be closely monitored as they have a large impact on India’s import bill, with the country importing more than three-fourths of its oil requirements.

Oil prices fell more than 5% to a two-month low as the new added to expectations a supply surplus could swell in the first quarter.