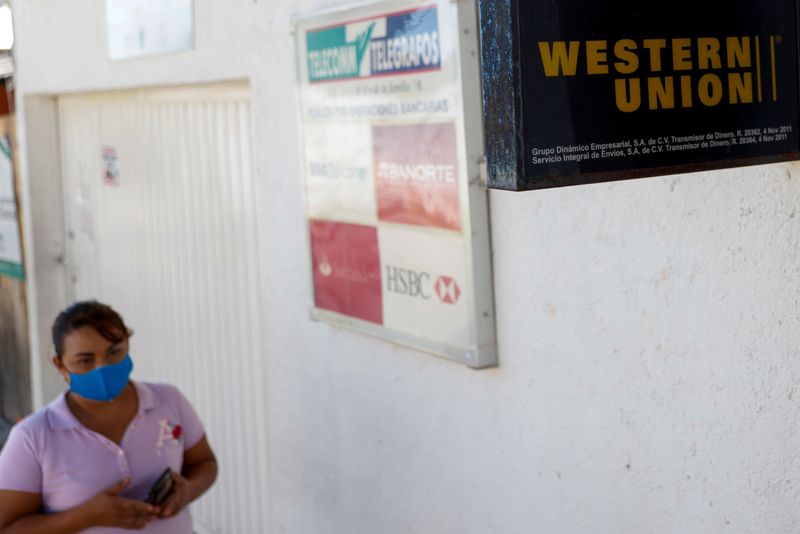 © Reuters. Home of Alberto Burgos, who works in the U.S. and sends money to his family in Jantetelco, state of Morelos

By Lizbeth Diaz and Abraham Gonzalez

JANTETELCO, Mexico (Reuters) – Alberto Burgos is one of thousands of Mexican migrants living in the United States who dug deep and sent extra money to family back home last year to alleviate the devastating impact of the coronavirus pandemic.

Growing plants and helping to handle their sale at a huge nursery in Alabama, the 35-year-old dipped into savings to transfer about a third more to his home town in central Mexico than he did in 2019, he said in an interview.

Burgos is one of a growing number of Mexicans with U.S. work permits or access to benefits who helped to fuel a more than 10% jump in remittances to Mexico last year to more than $40 billion, even as money transfers to other countries tumbled.

The record remittances have made Burgos’ home town of Jantetelco – which has sent many economic migrants to work in U.S. nurseries and elsewhere – an oasis of relative prosperity despite the worst recession to batter Mexico since the 1930s.

“Returning to Mexico made me very sad this time: it’s hard to see people with nothing,” Burgos said. “Thank God I was able to support them because I didn’t lose my job.”

Because of a surge in demand for flowers from Americans trying to brighten up their homes and enjoy gardening during lockdown, Burgos had about nine months of work in the United States last year, three months more than usual, he said.

The pandemic shaved 8.5% off Mexican gross domestic product (GDP) in 2020, but remittances softened the blow, helping Jantetelco residents to repair their homes and even cover private medical bills sparked by the strain on public hospitals.

Last year, total remittances to Mexico were equivalent to about 3.8% of GDP, according to calculations by economists including Jonathan Heath, a board member of Mexico’s central bank. Over 95% come from the United States, official data show.

The volume underlines Mexico’s reliance on the United States even as former President Donald Trump attempted to shut down migration with a border wall and threats of trade sanctions.

President Andres Manuel Lopez Obrador has hailed the migrants as “heroes” but Mexico’s dependence on their money shows the difficulty he has had in delivering on his pledge to create economic conditions that render migration unnecessary.

Helping to fuel remittances is greater access to social security among Mexicans in the United States, 60% of whom have lived there for at least 20 years, according to data from Washington-based think tank the Migration Policy Institute.

Since the financial crisis of 2008-2009, the percentage of Mexican migrants with U.S. citizenship has risen significantly, said Jesus Cervantes, a remittance expert at the Centro de Estudios Monetarios Latinoamericanos (CEMLA) research institute.

Over the past decade, the number of Mexican-born people registered in the United States has declined slightly. But the proportion of those holding U.S. citizenship rose by nearly a third to 37% of the total, according to the IPUMS USA database, based on an annual U.S. survey.

That, Cervantes said, made remittances to Mexico “more resilient” than they have been to other countries.

Global transfers to Latin America as a whole likely fell by around 20%, and declined by 13-22% to countries across Asia, according to an annual report by bank BBVA (MC:).

Much of the money captured in Mexico last year went into healthcare and housing, experts say.

In Jantetelco, some two hours’ drive southeast of Mexico City, 78-year-old Maria Elena Sandoval said she saved her foot from thrombosis thanks to private surgery paid for by money from a son living in the United States.

Burgos asked Reuters not to reveal how much money he was sending back via Western Union (NYSE:) lest it encourage criminals to target his family, a risk in Mexico.

A municipality of about 18,000 inhabitants, Jantetelco took in about 25% more in remittances between January and September than in the same period in 2019, according to central bank data.

In the third quarter, that equated to about $425 per person – or to almost two months’ worth of Mexico’s daily minimum wage.

“Thank God and thank my son they didn’t cut off my foot,” said Sandoval, a grandmother who said she spent the equivalent of $600 on medical treatment to save her limb.

Other Jantetelco residents said they have used remittances to pay for everything from construction and renovation of homes damaged by a 2017 earthquake, new cars, appliances and crop seeds, to coming-of-age parties.

Mexico’s leaders have traditionally tended not to draw attention to the money, given the often murky U.S. migration status of many people supporting families in Mexico.

But Lopez Obrador has repeatedly celebrated their contributions, and welcomed U.S. President Joe Biden’s bid to implement a reform that would settle the migration status of many Mexicans living in the United States.