The leadership of Mexico’s central bank was thrown into confusion on Tuesday after Senate majority leader Ricardo Monreal said the leading candidate’s name had been withdrawn, provoking uncertainty over monetary policy at a time of high inflation.

The choice of Arturo Herrera, previously finance minister under President Andrés Manuel López Obrador, was announced in June. He had been expected to start in January, pending Senate confirmation.

Monreal said the government had withdrawn his nomination in August but that it had not explained why, adding that Herrera could still be renominated.

Herrera himself later confirmed on Twitter that the president had told him he had decided to reconsider his appointment, without giving further details.

The office of the president did not immediately respond to a request for comment and has not made a public statement on the topic since the news broke.

Herrera had been seen by investors as close to the president, but analysts said Tuesday’s news sparked more concern over the economy. “There is a lot of uncertainty, a lot of noise,” said Adrián de la Garza, chief economist for Mexico at Citi. 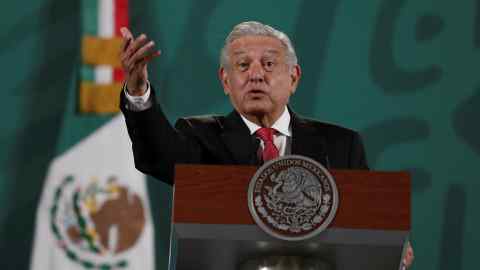 De la Garza said several names were circulating as possible nominees, should Herrera be out of the running, including Raquel Buenrosto, head of the tax agency SAT, Gabriel Yorio, deputy finance minister, and the bank’s other board members. He thinks any replacement for Herrera is likely to be someone with relevant experience.

“This could possibly have an impact on markets in the very short term, but eventually the uncertainty should dissipate.”

In December last year the ruling party sparked an outcry when it tried to pass a bill forcing the Bank of Mexico to buy dollars that banks could not repatriate. Rating agencies said the idea was credit negative for the sovereign and the bank itself pushed back hard. The plan was later shelved.

The news also came hours after the government published a directive to fast-track mega-projects and amid discussions over a radical overhaul of the energy sector. López Obrador’s critics say the moves threaten the rule of law and independent institutions.

With inflation climbing, the central bank raised rates for the fourth consecutive meeting earlier in November in a vote split 4-1 among members. Herrera is seen by markets as more dovish than current governor Alejandro Díaz de León.