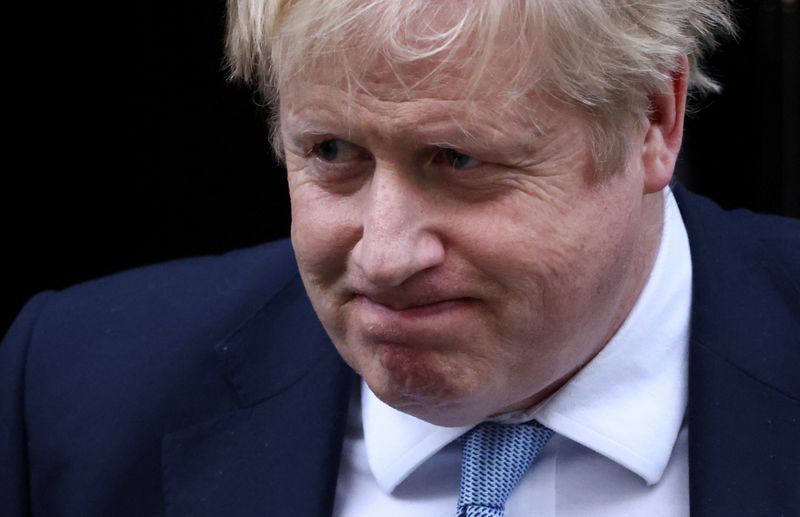 LONDON (Reuters) -British Prime Minister Boris Johnson was fighting on Friday to shore up his authority after a senior aide resigned over his false claim that the leader of the opposition Labour Party failed to prosecute a notorious child sex abuser.

Johnson, who in 2019 won the biggest Conservative majority since Margaret Thatcher, has repeatedly refused to resign over reports that he and some of his staff attended Downing Street parties during COVID-19 lockdowns.

Those revelations raised questions about Johnson’s often chaotic style of leadership and have led to the greatest threat to him since he took office. They follow a series of other scandals.

Johnson admitted that problems needed to be fixed at the heart of Downing Street, which serves as both his home and the nerve centre of the British state.

Munira Mirza, his head of policy who had worked with him for 14 years, resigned on Thursday over Johnson’s claim that Labour leader Keir Starmer failed to prosecute paedophile Jimmy Savile during his time as director of public prosecutions (DPP).

Johnson’s finance minister, Rishi Sunak, said pointedly that he would not have made such a remark. Starmer has cast Johnson’s comment as a ridiculous slur – and conspiracy theory – that shows Johnson is unfit to be British leader.

Ministers presented three additional resignations which followed Mirza as evidence that Johnson was fixing the problems at Downing Street and “taking charge”, though there remained considerable anger at Johnson within his own party.

But on Friday an eighth Conservative member of parliament, Aaron Bell, stated publicly that he had lost confidence in Johnson and submitted a formal letter calling for him to go.

“The breach of trust that the events in No. 10 Downing Street represent, and the manner in which they have been handled, make his position untenable,” Bell said.

To trigger a leadership challenge, 54 of the 360 Conservative MPs in parliament must write letters of no confidence to the chairman of the party’s 1922 Committee.

Letters can also be submitted in private, and the total number is not made public until there are enough to trigger a leadership vote.

Leading rivals within the Conservative Party include Chancellor of the Exchequer Sunak, 41, and Foreign Secretary Liz Truss, 46.

A spokesman for Johnson said the resignations of the prime minister’s three top aides — his chief of staff, principal private secretary and director of communications — had been agreed in advance of Mirza’s departure after the publication of a report into the alleged lockdown-busting parties that cited “serious failures of leadership”.

Asked if Johnson had lost control of his administration, the spokesman said: “No.” He added the prime minister had addressed Downing Street staff earlier on Thursday to thank those leaving and to acknowledge that change was challenging.

He quoted from the Lion King film, saying also “change is good”.

While opposition parties and some of Johnson’s own lawmakers have called on him to quit, there is concern that toppling a British leader at this juncture would leave the West weakened as it faces a potential military crisis in Ukraine.

With inflation soaring at the fastest rate in 30 years, anger at the government is likely to deepen before local elections in May.

A snap poll by YouGov conducted on Jan. 31 showed that 63% of voters wanted Johnson to resign, though another YouGov poll showed just 31% thought he would resign.

“This is the prime minister taking charge.”