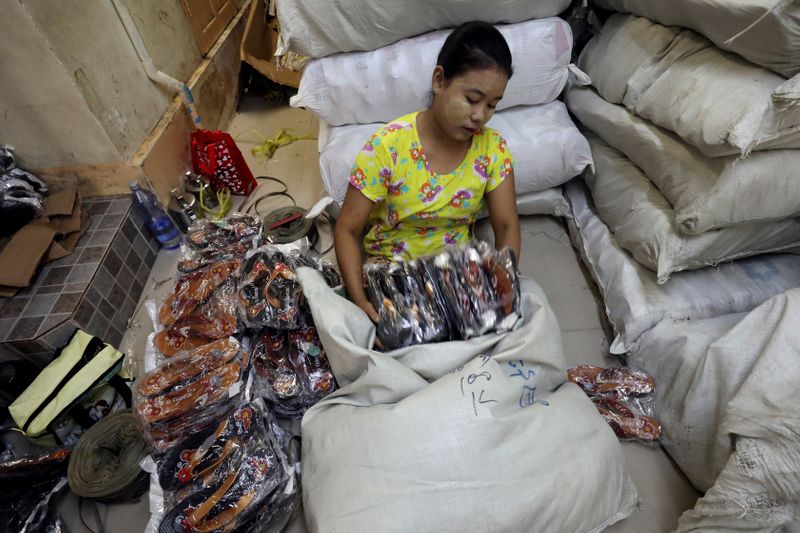 © Reuters. FILE PHOTO: A staff arranges footwears from a wholesale shop in Yangon

WASHINGTON (Reuters) – The coup in Myanmar is expected to further dampen the already tepid interest of U.S. and Western companies in investing in Myanmar, and may prompt some big U.S. companies to pull out, trade experts and analysts said on Monday.

Total trade in goods between Myanmar and the United States amounted to nearly $1.3 billion in the first 11 months of 2020, up from $1.2 billion in all of 2019, according to U.S. Census Bureau data.

Luggage maker Samsonite and privately owned apparel maker LL Bean are among the big importers of goods, along with retailer H&M and Adidas (OTC:), Panjiva said.

In the early hours of Monday, Myanmar’s army handed power to military chief General Min Aung Hlaing and imposed a state of emergency for a year, saying it had responded to what it called election fraud.

The move sparked condemnation from Western leaders and raised more questions over the prospect of the return of a million Rohingya refugees.

Lucas Myers, an analyst with the Woodrow Wilson International Center for Scholars, said the coup would exacerbate strains in the U.S.-Myanmar relationship following sanctions imposed by Washington in December 2019 and would further complicate trade ties.

William Reinsch, a former senior U.S. Commerce Department official and trade expert with the Center for Strategic and International Studies think tank, said U.S. companies could opt to pull out of Myanmar, given new developments and the Biden administration’s vow to focus more on human rights.

While some U.S. companies had moved work from China to Myanmar in recent years to take advantage of lower wages, the country’s infrastructure was still lacking, which had kept investment from booming, he added.

Most of the U.S. work was in relatively low capital-intensive industries and could be relocated fairly easily, Reinsch said. “It’s not semiconductors. These factories are relatively easy to set up,” he said.

The American Footwear and Apparel Association and the U.S. Chamber of Commerce had no immediate comment.