A combination of US fiscal stimulus disappointment and Omicron Covid-19 variant woes likely played a key role in markets. Over the weekend, US Senator Joe Manchin dashed hopes of getting President Joe Biden’s US$ 2 trillion ‘Build back Better’ economic bill passed. By not supporting the bill, it will almost be impossible for Democrats to pass the legislation without any Republican backing in the 50-50 Senate.

Meanwhile, threats of Covid-related restrictions in Europe also likely dented risk appetite. The United Kingdom is debating whether or not to impose fresh restrictions as the Netherlands locked down until the middle of January. Germany imposed a quarantine on travelers from the UK, and the Bundesbank warned that the nation’s economy may shrink this quarter.

Despite recent weakness in Nasdaq 100 futures, prices were unable to take out the key 15503 – 15580 support zone on the 4-hour chart below. Still, the index has confirmed a breakout under the 200-period SMA. A bearish crossover between that and the 50 line offers a downward technical bias. Clearing the support zone exposes the late October low at 15273. Otherwise, a push higher has the 50-period line in focus. 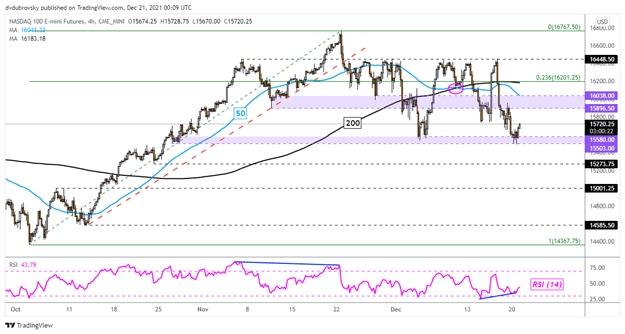 Following the disappointing session on Wall Street, Asia-Pacific markets could be at risk to more of the same on Tuesday. New Zealand announced that it will be delaying reopening its borders due to the Omicron variant. However, S&P 500 futures have been cautiously recovering since the Wall Street close, suggesting that some consolidation could be in store.

While the Omicron variant now makes up for about 75% of new Covid cases in the US, a lack of strict lockdowns could keep market sentiment from noticeably deteriorating as deaths remain relatively low. Japan’s Nikkei 225 and Australia’s ASX 200 are up 1.6% and 0.4% in morning trade.

The ASX 200 remains in a consolidative setting, but a bearish Head and Shoulders chart pattern could be in the process of forming. Prices are also testing the 200-period SMA, which appears to be maintaining the broader upside focus. The index is also being guided lower by a near-term falling trendline from August. Clearing the line exposes the right shoulder around 7480. Immediate support seems to be the 7207 – 7096 zone. 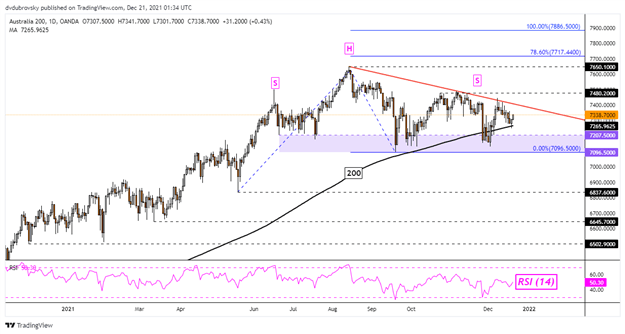