Arctic-like temperatures across US Northern Plains and Midwest bolstering prices Nord stream 2 pipeline political implications afoot as US and Russia set to spare Prices put in strong start to January, but outlook uncertain below 200-day SMA

Natural gas prices are on the rise once again amid volatile weather and an ongoing energy crunch in Europe. A blast of frigid air has blanketed the Northern Plains in the United States, with mercury readings well below zero. Meanwhile, winter storm warnings are in effect across several states. These factors are likely to increase demand for the commodity.

However, warmer temperatures are forecasted over the next several weeks across much of the US. If temperatures do rise, we may see prices trim gains made this week. Despite US benchmark Henry Hub prices being up over 3% on the month, the heating gas is coming off three consecutive monthly losses. Prices will have to rise more than 50% to challenge the 2021 high seen last October.

The Energy Information Administration (EIA) will report stockpiles for the week ending December 31 tonight, with analysts expecting a reduction of 54 billion cubic feet (bcf). An outsize draw may see a short-term bounce in prices. However, US prices have become more insulated from supply-side shocks, with storage levels recently rising above the 5-year average, according to EIA data (see chart below). 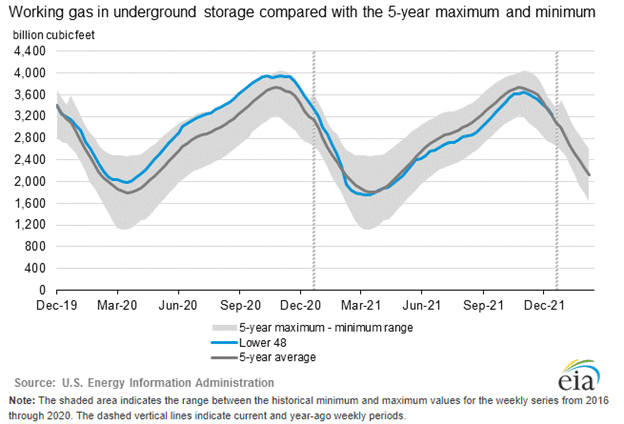 Elsewhere, European prices are even more volatile as the energy crunch across the continent continues to face low inventory levels and political implications from the Russian Nord Stream 2 pipeline. That pipeline – slated to go into operation in the second half of this year – is now being used as possible leverage over Russia.

US Secretary of State Anthony Blinken stated earlier this week that it would be hard to see gas flowing through the pipeline if Russia continues its aggression toward Ukraine. Russia currently has nearly 100,000 troops massed on the Ukrainian border, with many fearing a possible invasion. The United States and Germany have an agreement in place that measures would be taken against Russia were they to weaponize the pipeline.

Germany sees the pipeline as a way to diversify its energy sources, but the US has always opposed it. The Biden administration has several diplomatic meetings scheduled in the coming weeks with Russia to attempt to ease tensions on the Ukrainian border. However, the US Senate is planning to vote on a measure that could renege a Biden administration waiver over previous sanctions on Russia that targeted the pipeline, complicating matters further. Republicans, and some in Biden’s party, believe the project would bolster Russia’s influence over Europe.

US natural gas has made headway so far this year, but prices remain below the 200-day Simple moving Average (SMA), and the 50-day SMA continues to drop after crossing below the 100-day SMA last month. The 78.6% Fibonacci retracement provided support around 3.610. A break below that level may open the door for some bearish action. Alternatively, prices will need to pierce above the 200-day SMA if bulls want to drive prices higher. 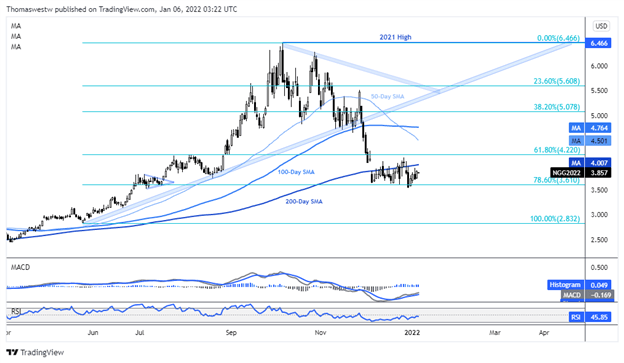