NYSE:NOK falls 2.77% to close the week as the S&P 500 tumbles.
r/WallStreetBets continues its assault on hedge fund managers to close the week.
Nokia Oyj was the highest traded equity in European markets over the past week.

Update: Nokia (NYSE:NOK) has risen by 7.24% on Monday, beating the trend of other short-squeezed stocks highlighted on Reddit’s WallStreetBets. Moreover, Tuesday’s premarket trading, it is only a minor slide. Retail traders have “migrated” to silver, which is a far bigger market but may return to short-hunting on companies such as Nokie. Moreover, the Finnish firm has been reinventing itself in recent years and has a decent bullish case behind it. For other stocks, see

NYSE:NOK has been reeled into the current Wall Street war between hedge fund managers and the Reddit subgroup r/WallStreetBets and it is not even a highly shorted company. Shares of the Finnish telecom giant sank by 2.77% on Friday and the stock closed at a price of $4.56 to end a tumultuous week on Wall Street. Nokia saw a daily transaction volume of over 358 million shares, which is more than five times the average daily volume of 70 million shares. During the past week, Nokia hit a new 52-week high of $9.79 before settling back down to its current price levels.

It has been quite the week for Nokia shareholders who unexpectedly got swept up in the great short squeeze of 2021. While other stocks like GameStop (NYSE:GME) and AMC (NYSE:AMC) are known to have massive short positions against them, Nokia does not, which makes it all the more confusing as to why it has been included. Because of its recent trading volume, mobile trading platform Robinhood has added Nokia to its banned stock list to limit how much investors can trade it. 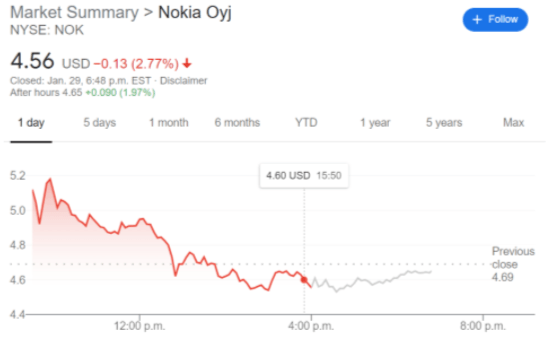 Like BlackBerry (NYSE:BB), Nokia actually has its own legs to stand on after the r/WallStreetBets rally ends, as the firm is still a global leader in telecom services. For its part, Nokia is already trying to distance itself from the movement, publicly stating that they are not aware of any material, undisclosed corporate developments or material change.