Novavax and its partner the Serum Institute of India have received authorisation for their Covid-19 vaccine in Indonesia, marking the first such global approval for a jab that could boost immunisation efforts in the developing world.

The US biotech said on Monday it had also submitted applications to regulators in Canada and the EU for authorisation of its protein-based vaccine, which has faced lengthy delays due to manufacturing issues. Last week, it applied for approval in the UK.

Novavax said its Covid jab would be sold in Indonesia under the brand name Covovax.

The emergency-use authorisation granted in Indonesia is an important moment for the Maryland-based company, which will begin marketing its first vaccine after more than three decades of operation.

Stanley Erck, Novavax chief executive, said it was likely to be the first of many authorisations announced in the coming weeks and months.

“This also marks the first regulatory authorisation worldwide of a protein-based Covid-19 vaccine based on phase 3 clinical data demonstrating efficacy and a favourable safety profile,” he added.

Novavax’s New York-listed shares surged as much as 15 per cent in pre-market trading on Monday.

Earlier this year, the drugmaker delayed submitting data to the US Food and Drug Administration as it struggled to put together consistent manufacturing information. 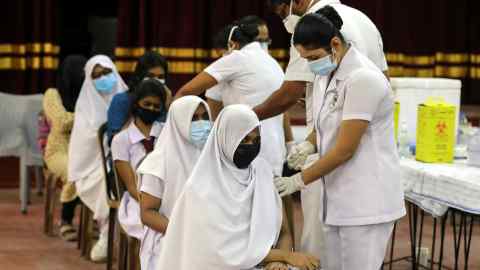 Health experts say the Novavax shot is unlikely to play a crucial role in the short-term in rich nations, which have hoovered up most of the global supply of messenger RNA (mRNA) vaccines made by Moderna and BioNTech/Pfizer.

But it could prove hugely important for lower-income countries and Covax, the vaccine access scheme backed by World Health Organization that has struggled to deliver doses.

Erck said authorisation of the Novavax vaccine in Indonesia exemplified the company’s commitment to equitable global access to jabs.

Novavax reported in June that its Covid vaccine was 90.4 per cent effective at preventing symptomatic disease in adults.

The Covovax shot is given in two equal doses 21 days apart and is stored at conventional refrigeration temperatures. In Covid trials earlier this year, the vaccine had 89.7 per cent efficacy overall.