The New Zealand Dollar struggled against the US Dollar overnight after the United States reported rosy labor market data. NZD/USD has struggled in recent weeks from a well-supported Greenback, which firmed up following a hawkish pivot from the Federal Reserve and a wave of risk aversion from the Omicron variant. This morning, New Zealand’s performance of manufacturing index (Nov) from BusinessNZ crossed the wires at 50.6, down from 54.2 in October. Electronic card spending for November fell slightly from the prior month.

The US Dollar DXY index found more support from the best US initial jobless claims figure since 1969. Initial claims for the week ending December 4 crossed the wires at 184k, much better than the forecasted 215k, according to the DailyFX Economic Calendar. That, however, didn’t help US equities. Technology and small-cap stocks led Wall Street lower, with the Russell 2000 index sinking over 2%. Investors appear to be shifting into a more defensive posture within the US stock market.

Elsewhere, the Chinese Yuan retreated against the US Dollar after USD/CNH hit the lowest level Since May 2018 earlier this week. The People’s Bank of China (PBOC) increased the foreign exchange reserve ratio, directing banks to hold 9% of FX in reserve. That is up from 7% and the second increase of the year. China’s strong trade and foreign investment have bolstered the Yuan this year. Foreign exchange deposits hit record levels this year, displayed in the chart below. 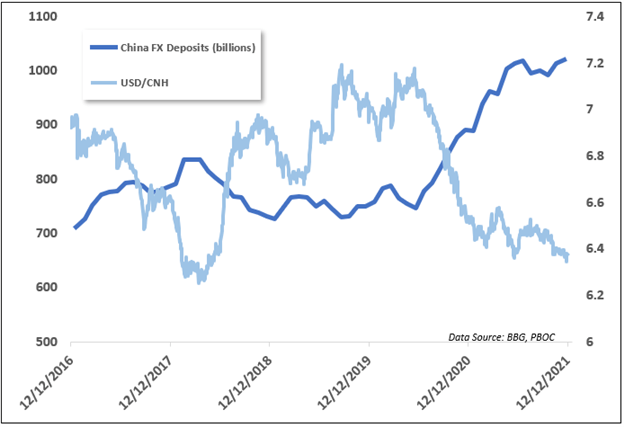 China wants to avoid a strong domestic currency as it could hurt its export-based economy. The move may also bode well for Chinese equities that have been under pressure in recent months from the ongoing Evergrande crisis. FXI – an index that tracks Chinese large-cap stocks – rose on Wall Street as broader equity markets faltered.

Crude and Brent oil prices are under pressure from the lingering Omicron variant threat. While it appears Omicron is likely not as deadly as other strains, experts fear it may still increase hospitalization rates – especially in countries with lower vaccination rates. That may weigh on global growth, hence the hit on oil prices. The upcoming US CPI print due tonight will set the tone going into next week’s Federal Reserve meeting. Analysts expect CPI to cross the wires at 6.8% y/y, according to a Bloomberg survey.

NZD/USD is attempting to break out of a downward channel that has directed prices lower since early November. A Bullish Engulfing candlestick pattern earlier this week saw a subsequent break above channel resistance, although prices have yet to breakout from the range. Still, MACD is improving and nearing a cross above its signal line, a bullish sign. The September low at 0.6859 is a likely upside target if bulls do take control. 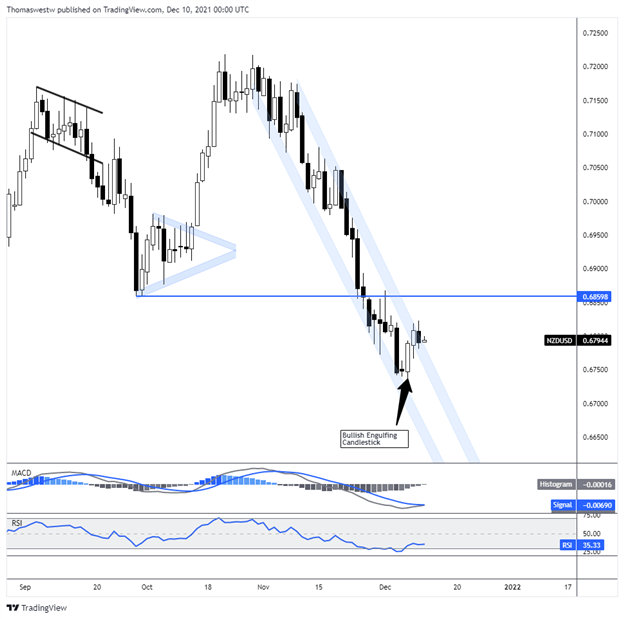